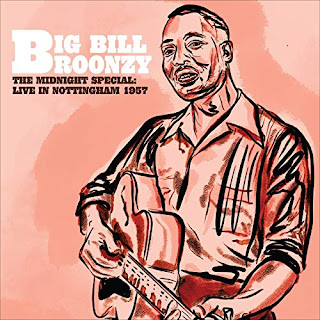 
Chicago blues legend “Big Bill” Broonzy was a bridge between the rural, Delta-influenced country blues of the 1920s and ‘30s and the more urbane, sophisticated “big city” blues created in hotbeds like Chicago, Detroit, and St. Louis during the 1940s and ‘50s. Although not as well-known as near-mythical contemporaries like Robert Johnson, Charley Patton, or even Son House, Broonzy’s influence can be heard in the music of those touched by his kindness, giants of the genre like Muddy Waters and Willie Dixon, whose careers he helped when they first arrived in Chicago. Although he died in 1958 at the age of 65 years old, Broonzy’s music also inspired a generation of British rockers like Keith Richards of the Rolling Stones, John Lennon of the Beatles, Dave Davies of the Kinks, and guitarists Rory Gallagher and Eric Clapton, among many others.

Born, literally, on the banks of the Mississippi River, Broonzy moved with his parents to Chicago as a teenager in 1920, picking up the guitar and learning to play from older bluesmen like Papa Charlie Jackson. Broonzy began recording in the mid-‘20s and by the early ‘30s he was a commanding figure on the Chicago blues scene who would help define the city’s early sound. Capable of playing in both the older vaudeville styles (ragtime and hokum) and the newly-developing, more sophisticated Chicago style, Broonzy was a smooth vocalist, accomplished guitarist, and a prolific songwriter.

Broonzy began recording for Paramount in 1927, but it was his work for Bluebird Records during the 1930s, including playing behind talents like Tampa Red, Washboard Sam, and John Lee “Sonny Boy” Williamson, that helped define the popular sound that was known as “The Bluebird Beat.” In 1938, Broonzy performed at John Hammond’s “Spirituals To Swing” concert in New York City as a last-minute replacement for the late Delta bluesman Robert Johnson. The appearance introduced an entirely new audience to his music, winning him a small role in the film Swingin’ The Dream alongside Benny Goodman and Louis Armstrong. When the post-war blues boom rendered Broonzy’s quaint homegrown style a thing of the past, he re-invented himself as a singer of authentic folk-blues and became one of the first blues artists to tour Europe, developing a new and appreciative following among blues-crazed British teens.


The Midnight Special: Live In Nottingham 1957 documents one of Broonzy’s late-career concerts, this one in Nottingham, England and possibly one of the bluesman’s last-ever performances before his death a year later. The album was mastered from original analog tape by Dave Gardner at Infrasonic Mastering and is surprisingly good, given the antiquated vintage of the recording. A sound engineer can only work with what they have on tape, and recordings from the ‘50s generally don’t have much sonic dynamic to enhance, but Gardner did a fine job here, Broonzy’s vocals and guitar sounding slightly muffled, but distinct enough to be entertaining and better than many dodgy 1990s-era live recordings I’ve heard. And make no mistake, Broonzy’s performance this night was, indeed, very entertaining.

The folk-blues “songster” runs through a setlist here of blues, folk, and Gospel standards, imbuing each with his unique character and charisma. The traditional “This Train” is a perfect showcase for Broonzy’s nimble-fingered fretwork, the song’s up-tempo arrangement complimented by Broonzy’s hearty vocals. The bluesman’s original “Willie Mae” is a similarly upbeat tune with wiry guitar licks and moaned lyrics while a cover of Leroy Carr’s “In the Evening” is provided a smoldering, passionate vocal delivery that is punctuated by Broonzy’s jazzy picking. “The Midnight Special” is a traditional Southern folk tune popularized in the 1930s by the great Leadbelly, and later recorded by everybody from Bob Dylan and Little Richard to the Beatles and Creedence Clearwater Revival. Broonzy’s jaunty reading of the old chestnut is highlighted by his warm vocals and spry guitar strum.

Broonzy’s original “Keep Your Hands Off Her” is mistitled here, the song originally released as a single in 1935 by Bluebird Records and it’s a fine example of the light-hearted “hokum” blues style with buoyant guitar picking and upbeat, double-entendre lyrics. The traditional “Ain’t Nobody’s Business” was recorded with some success by blueswomen like Alberta Hunter and Bessie Smith in the 1920s, and Broonzy’s version here plays up the song’s vaudeville roots with a brilliantly-upbeat performance and jazzy guitar-playing. “The Feasting Table” is one of a handful of Gospel “spirituals” included on The Midnight Special, this one leaning more towards a raucous tent revival in its energetic reading and scattershot guitarplay.

Although the song’s true origins are shrouded in mystery, Broonzy released “C.C. Rider” (a/k/a “See See Rider”) as a single in 1934. Ragtime pianist Jelly Roll Morton recalled hearing the song as far back as 1901, and Broonzy claims to have been taught the song by a former slave when he was but 10 years old. The song is no worse for the wear, however, and Broonzy’s infectious reading here is enhanced by an inspired mix of blues, jazz, and country twang. The Midnight Special closes with two performances from an “informal backstage session,” the spiritual “Swing Low, Sweet Chariot” and Leadbelly’s folk-blues standard “Goodnight Irene.” The former is a reverent, fervid performance with Broonzy’s wailing voice staggering at first before breaking into a joyous noise while the latter song is provided a loose, almost rowdy reading with nearly-bellowed vocals and scraps of accompanying guitar.


Big Bill Broonzy’s The Midnight Special: Live In Nottingham 1957 offers an impressive representation of the artist’s immense instrumental talents, his on-stage presence and crowd-pleasing patter, and his innate ability to interpret a wide range of then-contemporary musical styles. As mentioned above, the album’s sound quality is better than one could hope for, and the artist’s performance displays why Broonzy was held in such high regard by his peers.

There is precious little “live” Broonzy available for blues fans; just a mere handful of albums now commanding collectors’ prices, and just one of a similar vintage – Southland’s The Historic Concert Recordings CD captures an 18-song Belgium performance from 1957 – which was released in 1990 and has been out-of-print nearly as long. Org Music’s vinyl release of The Midnight Special is the first appearance of this particular show that I could find, and is available on both shiny black wax from Org Music or pressed on coral-colored vinyl, available exclusively from Vinyl Me, Please (links to both below).

If you’re an old-school blues fan unfamiliar with the artist’s charms, you owe it to yourself to check out The Midnight Special, which provides an engaging introduction to Big Bill Broonzy. If you’re already a fan of Broonzy’s music, then what are you waiting for? Get it! (Org Music, released July 24th, 2020)