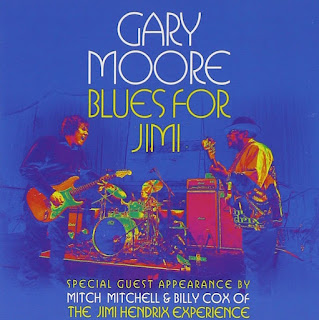 Irish-born blues-rock guitarist Gary Moore has never made any secret of the impact that his musical influences have had on his decision to pick up a guitar and subsequently forge a lengthy and acclaimed career from his talents. From British blues pioneer Peter Green’s work with John Mayall and Fleetwood Mac to Delta blues legend Robert Johnson’s groundbreaking art, Moore’s largish back catalog is littered with references and inferences to these important artists.

American blues-rock guitarist Jimi Hendrix is another musical giant who has had a powerful effect on Moore’s career, beginning with his late 1960s blues-rock trio Skid Row and throughout his prolific solo career. In October 2007, as the Hendrix estate was preparing to release Jimi’s Live At Monterey album, Moore performed a unique concert at the London Hippodrome. With his touring band at the time – bassist David Bronze and drummer Darrin Mooney – Moore cut loose with a lengthy set of classic Hendrix material. This London Hippodrome concert was filmed and released as Blues For Jimi on CD, DVD, and Blu-ray disc, the first posthumous release by Eagle Rock since Moore’s unexpected death in February 2011.

The album starts out promising enough with “Purple Haze,” the song’s familiar screaming psychedelic-colored intro jumping things off. As Moore’s vocals slide into the first verse, however, one can easily hear the difference between Hendrix’s original warm, mellifluous voice and Moore’s gruffer, strained tones. Moore embellishes Jimi’s original soundtrack for the song with a few tasty flurries of notes, especially the finishing thunderstorm of sound and fury, redeeming the performance by strength of will.

“Manic Depression” begins in much the same way, with a chaotic instrumental opening that, by now, is encoded in the Hendrix fan’s DNA. Moore’s vocals are buried somewhat deep here in the mix, and he’s singing at a different register that’s closer to Jimi’s soulful wail. The fretwork is stellar, however, wrestling with Jimi note for note in some instances, taking off and soaring into the stratosphere in others. Moore’s vocal shortcomings are quite evident on the slower, ballad-styled songs like “The Wind Cries Mary,” the guitarist simply unable to achieve the nuance and emotional tenderness that provides a counterbalance to the song’s lofty guitar tones.

Hendrix’s “I Don’t Live Today” was one of the legend’s best blues-rock songs, and while Moore opens up the arrangement to allow for his own unique brand of six-string pyrotechnics, overall the performance is true to the spirit, if not the letter of the original blockbuster. Moore’s trippy, psych-drenched solo three-minutes or so in is matched by the furious backdrop of Dave Bronze’s powerful bass foundation and drummer Darrin Mooney’s explosive, unrelenting barrage of percussion.

Moore’s original instrumental intro into “Angel” is hauntingly beautiful, albeit too brief by a mile, leading into the song with his vocals softer and more effective here than previously. Moore manages to capture a modicum of the wistfulness displayed by the original, an emotional edge bolstered by his spot-on mimicry of Hendrix’s pitch-perfect guitar lines, save for a big closing which is stunning in its intricacy and elegance.

Longtime Hendrix friend and bassist Billy Cox and original Experience drummer Mitch Mitchell join Moore and his band for a trio of their favorite Hendrix songs, beginning with the blustery blues-rock romp “Red House.” Moore lays down his strongest, bluesiest riff yet for the song’s opening, the performance itself a welcome slow grind of stinging guitar notes and solid, if unspectacular rhythms. Moore’s fretwork is simply incendiary, stretching the song out to an entertaining eleven-and-a-half minutes with quiet solos and raucous crescendos of sound alike accompanied by sparse backing instrumentation.

By contrast, Hendrix’s signature “Stone Free” frequently descends into sonic anarchy with swirls of bass and drums punctuated by razor-sharp guitar licks. Moore rejoins his regular band for the classic Jimi rocker “Voodoo Child (Slight Return),” its familiar instrumental gymnastics re-created here with reckless abandon, Moore banging his plank and coaxing out sounds even Hendrix would find alien as the Bronze/Mooney rhythm section strikes your ears like a wrecking ball. It’s Moore’s red-hot fretwork that rolls you over, though, striking like a cobra and generating enough raw electric amperage to power a small Irish village for a month.

The best part of Blues For Jimi is when Moore stops singing and just plays his guitar, his vocal performance on this classic material frequently falling short of even second-tier Hendrix doppelgangers like Arthur Lee or Lenny Kravitz. While I have no doubt that Moore is doing the best with what he has to work with, his voice just isn’t up to the chore of covering this many classic, too-familiar musical treasures either on stage or on record.

Moore doubles-down on the guitar fireworks, however, delivering an inspiring instrumental performance in these grooves that allows the listener to (mostly) forget the vocal shortcomings and instead enjoy the heartfelt tribute that is Blues For Jimi. This is maybe not the swansong that Gary Moore would have wanted, but it’s a neat bookend to a career spent in sincere awe and admiration of those artists that influenced a young Irish lad to pick up the guitar in the first place. (Eagle Records, released September 25, 2012)

Buy the CD from Amazon.com: Gary Moore’s Blues For Jimi