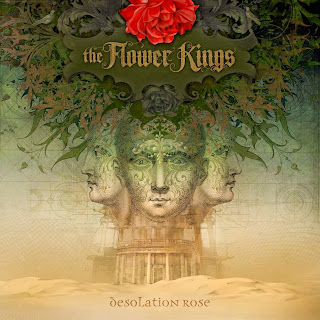 One of the Reverend's favorite prog-rock outfits, the Flower Kings, are set to release a follow-up to their critically-acclaimed 2012 album Banks of Eden. On October 29, 2013 Inside Out Records will release the band's Desolation Rose, the album featuring gorgeous cover art by Silas Toball. The U.S. release will include a second bonus disc while, musically, the album offers the typical Flower Kings mix of exhilarating guitar-driven rock and progressive soundscapes, with heady socially-conscious lyrics also typical of the Swedish musical legends.

Says Flower Kings frontman Roine Stolt in a press release for the album, "being somewhat of a political statement, the epic theme of Desolation Rose is a logical step in a time where perpetual war, famine, environmental threats, religious conflicts dominate the media and our minds. This is a time to wake up and the music on this album takes you on a journey where you are forced to questions what the mainstream media feed us and to rethink your whole world view on all of the above. This is in many ways a typical Flower Kings album but we have also taken it into another realm where we do take chances and where you may struggle to get into the music – or the lyrics – but trust me when I say that you will be rewarded, as this may be our most involved, important and interesting album ever."

Click on the CD cover above to buy the Flower Kings' Desolation Rose from Amazon.com
Posted by Rev. Keith A. Gordon at Friday, October 04, 2013