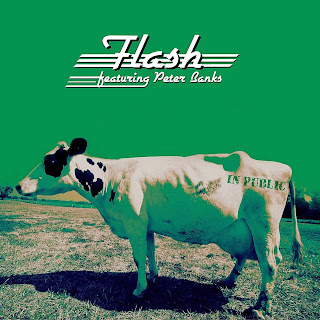 When guitarist Peter Banks was replaced by Steve Howe in the pre-fame Yes in 1971, he enlisted the help of keyboardist Tony Kaye (Yes's original keyboard wizard) to form Flash, the band also including vocalist Colin Carter, bassist Ray Bennett (from hard rock trio Gun), and drummer Mike Hough. It was this line-up that recorded the band's acclaimed, self-titled 1972 debut album. Kaye left shortly thereafter to form a similar prog-rock outfit in Badger,  and Flash soldiered on for two more albums – 1972's In The Can and the following year's Out Of Our Hands – before Banks departed to launch his solo career.

Although Flash toured steadily during the early 1970s in support of their trio of albums, documents of their electrifying live performances have been few and far between. Aside from a handful of bootleg recordings, the only mass-distributed live Flash disc has been 1997's Psychosync, an album of dodgy provenance itself. Long-suffering Flash fans can now take heart, the release of In Public satisfying the desire for a live Flash disc. Produced by former band associate George Mizer and Banks himself before his tragic death earlier this year, In Public documents a January 1973 show at The Cowtown Ballroom in Kansas City that captures the band in all of its glory, the classic Flash line-up (sans Kaye) instrumentally firing on all cylinders.


After a brief intro, "Small Beginnings" opens the set, the song itself the opener from the band's debut album. The Yes influence here is undeniable, not only because Banks had been gone from the band for such a short time before launching Flash, but also in the song's sense of melody, whiplash time signature changes, and familiar riffing. But "Small Beginnings" also proved somewhat of a signature song for the young band, paving prog-rock pastures in the creation of their own identity. The song includes some jazzy flourishes, especially in Banks' raging fretwork, and Hough's bombastic rhythm work leaves one breathless, the underrated pounder mixing the deft technical mastery of Bill Bruford with the improvisational fury of Buddy Rich.

A wildcat reading of "Black And White," from Flash's sophomore effort In The Can, opens with Hough's spry drumbeats atop which Banks layers on swirling, prog-psych guitar textures. A twelve-minute opus, the song is the perfect showcase for both the band's individual talents and immense chemistry. The odd man out may be vocalist Colin Carter, who is too frequently (and unfairly) compared to Jon Anderson of Yes when, in fact, he has his own distinctive style. "Black And White" is as much a display of Carter's impressive vocal gymnastics as it is for the guitar or percussion and, at nearly a quarter-hour of playing time, there's a lot of virtuoso sounds emanating from the grooves.

Children of the Universe


"Stop That Banging" is a shorter, albeit more cacophonic showcase for Hough's percussion cannon, the sort of extended drum solo that shot Iron Butterfly's "In A Gadda Da Vida" to the upper reaches of the charts. Although the drum solo was de rigueur during the early daze of the 1970s, such instrumental displays have long since passed their sell-by date and sound harsh and unnecessary without the accompanying smell of bongwater and a smoky haze. Luckily, In Public picks up quickly where "Black And White" left off, the second album's "There No More" a less-dated and dazzling showcase for Banks' phenomenal (and underrated, too) six-string skills as well as bassist Ray Bennett's extraordinary command of the fat strings. Although Bennett's contributions to these performances are often overshadowed by his partner in the rhythm section, listen closely and you'll hear some fine melodic chops as Bennett serves as a rhythmic foundation for Banks' guitarplay; Carter's vocals are nicely done here as well.

From the debut album, "Children of the Universe" is actually shortened somewhat from its original nine-minute running time (OK, so only by 17-seconds), the song still serving as the centerpiece of In Public and providing a breathtaking performance entirely on its own. With a curiously syncopated rhythm dominating the bottom end, Carter's vocals slip and slide across the soundtrack as Banks' guitar recedes a bit but never ceases to amaze. By contrast, the set-closing "Dreams Of Heaven" doubles its running time from the debut album, the band launching into a nearly twenty-five minute headtrip of swirling guitars, crashing cymbals, staccato drumbeats, throbbing bass lines and stop-on-a-dime musical lane changes. You'll hear scraps of other songs incorporated into what is, at heart, an improvised free-form jam, including a melody from the Byrds' "So You Want To Be A Rock & Roll Star." The song changes directions more often than a wind vane in a tornado, and subsequent listens reveal different musical patterns, shapes, and textures created by the instrumentation.


Flash is one of those bands that you either "get" or you don't…the unwarranted "Yes lite" tag on the band was discarded years ago so that their three classic studio albums stand well on their own. Considering that many new listeners (old and young), in search of real musicians and exciting, adventurous music, are discovering the charms of Mr. Banks and crew, this is a welcome addition to the Flash canon. Additionally, the accompanying CD booklet includes memories of the band from former stage crew members, musicians like Steve Howe and Keith Emerson, and others.

In the wake of Banks' death, former bandmates Carter and Bennett have struck out on their own with a new album titled Flash Featuring Ray Bennett & Colin Carter, the former bassist picking up the lead guitar duties and Carter providing vocals and rhythm guitar on an inspired set of classic and modern-styled progressive rock. Newcomers to Flash should start with the band's first couple of studio efforts before hitting the store for In Public, but long-time fans will enjoy this inspired live set as well as the new incarnation of the band.

(Click here to buy Flash's In Public from Amazon.com)
Posted by Rev. Keith A. Gordon at Wednesday, October 30, 2013