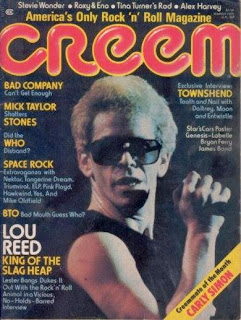 Rolling Stone may have been the first to report on the tragic loss to the world of rock music that came with the death of rock 'n' roll legend Lou Reed, but they certainly weren't the last to speak their minds on the acclaimed musician and songwriter. I'll leave it up to all those other folks to provide the minutiae of Reed's life, and biographies of the artist are certainly easy enough to come by, so I'll just relate Lou's importance to my life and career as a rock critic.

I was too young to have experienced the Velvet Underground, Reed's influential and essential mid-to-late-1970s band, but I came to love Reed's music with the release of his 1972 self-titled solo album. A collection of old, and sometimes unreleased or obscure VU tunes, with a handful of new songs, Lou Reed the album was a curious beast, comprised of both lean, stripped-down, garage-level rockers with a touch of the old Velvet magic, as well as some grand, exciting compositions that borderlined on prog-rock with their lush arrangements and progressive slant. Reed even enlisted the help of future prog legends Steve Howe and Rick Wakeman in the studio!

I had read about Reed's solo album in the pages of Creem, the music bible of choice for a young rock 'n' roll fanatic, and listening to it in its entirety proved to be a revelation. Lou Reed sent me back in time to rediscover the Velvet Underground, and opened the door to a future of musical possibilities. No longer restrained by either AM Top 40 pop or AOR-oriented FM radio, Reed's early albums – the debut, Transformer from later in '72, and 1973's Berlin – would lead me directly to energizing and inspiring music from artists like the New York Dolls, the Dictators, and the Flamin' Groovies, but it was Reed that first put me on that track.

When in high school, my Reed fandom was no secret, and when a bad haircut was forced on me by my parents to make me "presentable" for my grandfather's funeral (thanks Brentwood Barber Shop!), friends at old Franklin High began calling me "Lou" when Reed started wearing short-cropped and dyed hair. And yes, I dug the comparison! When Reed enlisted two of my fave Motor City axemen in Dick Wagner and Steve Hunter for Rock N' Roll Animal, I was thrilled.

But with the release of Metal Machine Music, which coincided with graduation from high school in 1975 and my subsequent sojourn into a semester of college and, subsequently, full-time employment, I lost track of, and interest in Mr. Reed. Although I followed Reed's jousting with rockcrit idol Lester Bangs in the pages of Creem, I wouldn't pick up on the man's music again until 1982's The Blue Mask, which prompted me to look backwards at Coney Island Baby (1976) and Street Hassle (1978). 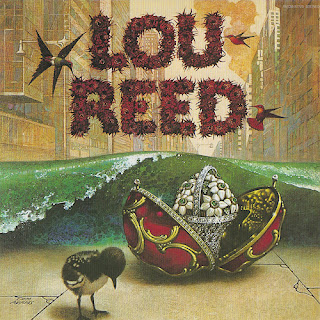 Although Reed was no longer my fave rocker – a status I'd bestow on Bruce Springsteen after seeing him perform half a dozen times between 1978 and 1985 – I kept up with his work sporadically through the years and on albums like New Sensations (1984), the wonderful New York (1989), and Magic and Loss (1992). Reed gets a bad rap for the inconsistency of his albums through the late 1980s and into the new millennium, but he was consistent in his experimentation and willingness to take risks, and for every travesty like Lulu (2011) there is a triumph like The Raven (2003).

Reed only ever had one "hit single" – the ubiquitous "Walk On The Wild Side," from his 1973 sophomore album Transformer – which rose to #16 on the chart and drug the album behind it and into the Top 30. That's not to say that Reed didn't experience some commercial traction afterwards, as albums like 1974's Sally Can't Dance (#10), Coney Island Baby (#41), and New York (#40) all enjoyed modest success while virtually all of Reed's 1970s and '80s albums charted at least for a short while.

Reed's influence on rock music transcended commercial concerns; as a songwriter, he built upon the lyrical possibilities first created by Bob Dylan to expand the vocabulary of rock 'n' roll and allow artists as diverse as David Bowie, Ian Hunter, Tom Waits, and Patti Smith, among but a few, to aggressively chase their creative muse and wrestle the beast to the ground. As a musician, Reed continued to push the envelope in various interesting ways, never settling on a singular style or content to retread past glories…and for that, rock fans owe the man a debt of gratitude that we'll never be able to pay…

(Thanx to brother Thom King for the video links below)