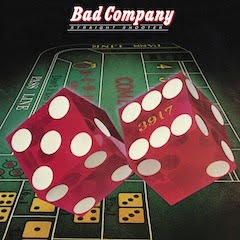 When I was a wee sprout of a rock ‘n’ roll fanatic, the British blues-rock outfit Free was one of my fave rave bands. As such, I couldn’t understand why they broke up when they broke up…back in those days, there was no Internet to provide gossip, lies, and innuendo, so Paul Kossoff’s drug problems and inter-band tensions weren’t widely-known knowledge…especially to snot-nosed teenage fans.

When former Free frontman Paul Rodgers and the band’s drummer Simon Kirke formed Bad Company with former Mott the Hoople guitarist Mick Ralphs and former King Crimson bassist Boz Burrell, I begrudgingly gave their self-titled 1974 album a spin. Although Bad Company, the album, wasn’t Free, it was still pretty good, and I soon had another favorite band. Quite a few other young rockers must have shared my feelings, because Bad Company shot up to number one on the Billboard Top 200 album chart, eventually selling five million copies on the strength of hit singles like “Can’t Get Enough” (charted at #5) and “Movin’ On” (#19) as well as featuring tunes like “Ready For Love,” “Rock Steady,” and the atmospheric album title track.

Sadly, Boz Burrell passed away in 2006, but the current Bad Company version includes original members Rodgers, Ralphs, and Kirke along with guitarist Howard Leese and bassist Todd Ronning (from Rodgers' solo band). Vinyl copies of both albums will be on sale at the band’s shows as well as available through fine record shops everywhere.