Midnight Rider – A Tribute To The Allman Brothers Band 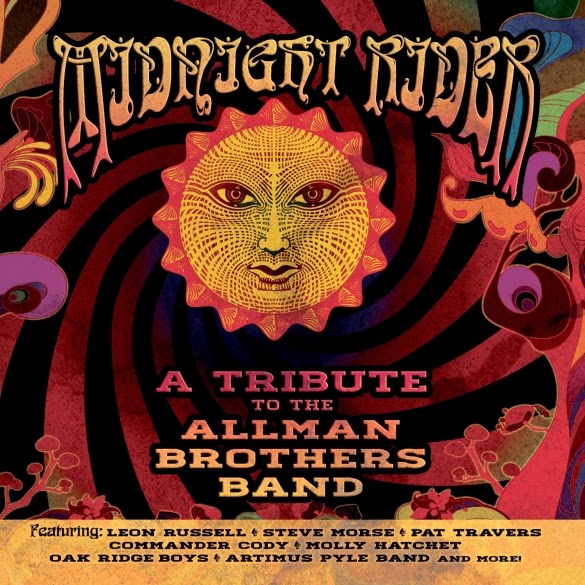 The Allman Brothers are one of those true American music treasures, and there have been numerous tribute albums released through the years in their honor, including 2002’s A Jam Band Tribute To The Allman Brothers and even…ahem…2009’s Chartbuster Karaoke. Clear some space on your CD shelve, ABB fiends, ‘cause here comes one more tribute disc!

On May 27th, 2014 Cleopatra Records will release Midnight Rider – A Tribute To The Allman Brothers Band, a twelve-song collection that features new performances of some of the band’s most classic tunes, including “Midnight Rider,” “Statesboro Blues,” “Ramblin’ Man,” and “Whippin’ Post,” among others. Cleopatra has lined up some fine talent, as well, ranging from blues guitarists like Ronnie Earl, Debbie Davies, Eli Cook, and Eric Gales to classic rockers like Pat Travers and Leon Russell, old friends of the band like Jimmy Hall (Wet Willie), Molly Hatchet, and the Artimus Pyle Band to talented fretburners like Sonny Landreth and Robben Ford. You’ll find the complete list of artists involved and the songs they cover below. The timing is opportune, as All My Friends, a recently-released Gregg Allman tribute album, is selling like flapjacks and has topped the blues chart for a couple of weeks as of this writing.

“The Allman Brothers were a central part of my roots,” states guitarist Steve Morse, in a press release for the album. “Living in Georgia much of my life, they were the local legends that everybody loved. They had the swing, the inventive double guitar parts, the ability to jam just long enough to keep the audience, and that golden voice of Greg’s! When my instrumental rock band, the Dixie Dregs, played, we often played ‘Jessica,’ which automatically makes any audience start moving and smiling. I’ve been lucky enough to sit in with many of the members at various times, and we have shared a lot of common ground. I’m still a fan!”

Buy the album from Amazon.com: Midnight Rider - Tribute To The Allman Brothers Band
Posted by Rev. Keith A. Gordon at Monday, May 26, 2014