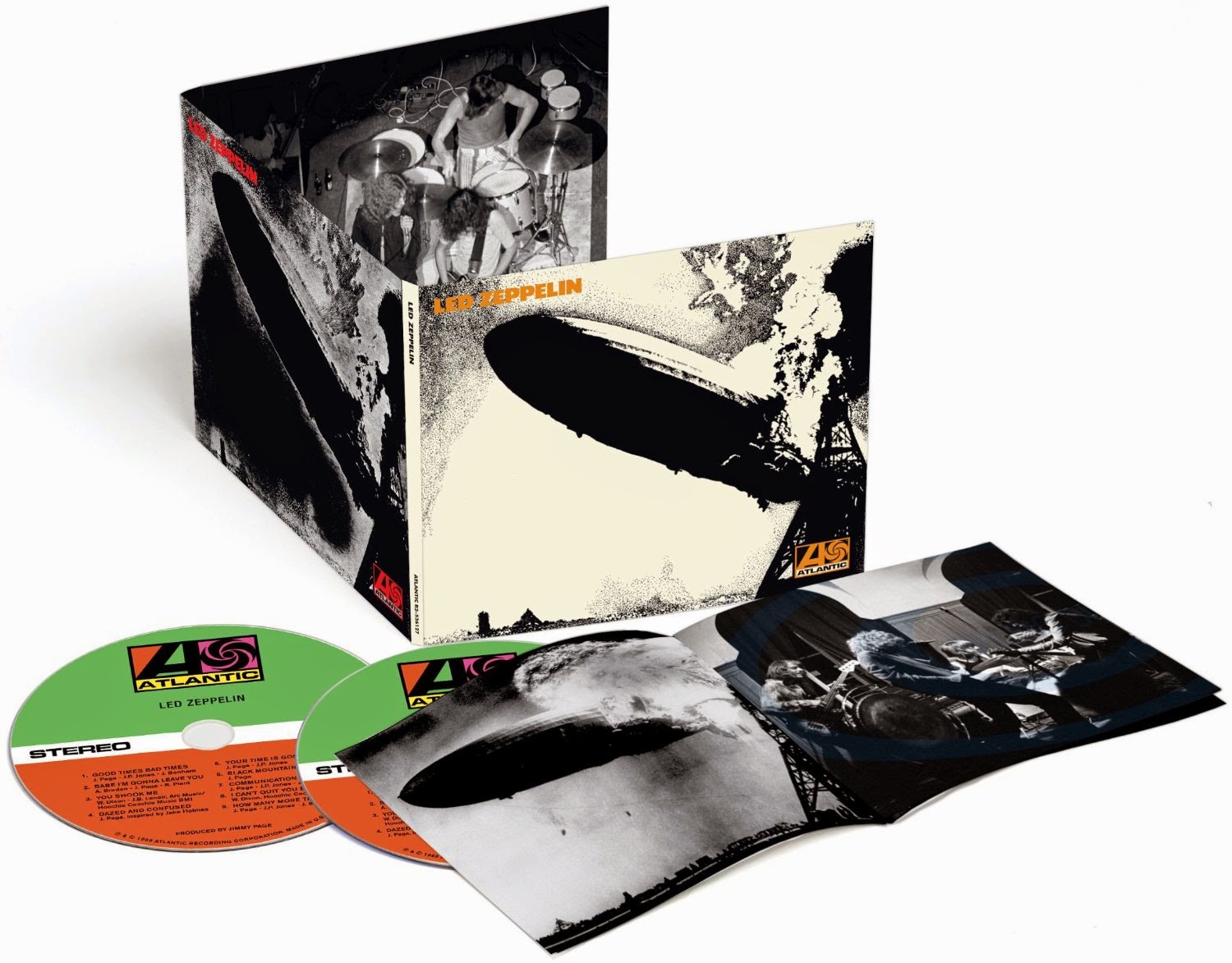 For those of you born in the Internet age, where music is ubiquitous and it’s relatively easy to pluck nearly any album, however obscure, out of the deepest corners of cyberspace, there’s no good way to relate just how ground-breaking and earth-shaking the first Led Zeppelin album truly was. Rising from the ashes of legendary British blues-rock outfit the Yardbirds which, at one time, boasted of such six-string heavyweights as Eric Clapton and Jeff Beck among its members, guitarist Jimmy Page was the literal last man standing. Inheriting the Yardbirds name and reputation, Page pieced together a band initially called “the New Yardbirds” to honor already-booked performances. Recruiting fellow studio pro John Paul Jones on bass, Page found a pair of relative rock ‘n’ roll newcomers in singer Robert Plant and drummer John “Bonzo” Bonham.

These four talents are the men who would become rock ‘n’ roll giants as Led Zeppelin. Venturing into the studio for the first time to record, the band was short on material but rich with ideas, and Page brought with him years of studio experience in his role as bandleader and producer. Although Page has often been criticized, as the band’s composer, for his liberal “borrowing” of musical ideas from artists like Jake Holmes, Bert Jansch, Willie Dixon, and even his old friend and bandmate Beck, in reality Page was honoring an ages-old tradition of folk and blues artists by adapting and transforming existing material into a new creation that stands entirely on its own. Page was building on the work of blues-rock trailblazers like Eric Clapton and Cream and the Jimi Hendrix Experience, and creating something unique and magical in the process.

As the band’s main lyricist, Plant was equally to blame for including scraps of half-forgotten blues and folks songs in the writing of his words. Regardless of the band’s felonious inclinations, Page’s skills as a guitarist, arranger, and producer – when blended with the equally impressive instrumental talents of Jones and Bonham, as well as Plant’s enormous voice and golden charisma – would prove not only enduring but also incredibly influential. Released in January 1969, Zeppelin’s self-titled debut has sold better than ten million copies through the years. It was typically slagged by critics at the time (especially by Rolling Stone magazine), but has since become widely considered as one of the top rock albums of all time, influencing bands as diverse as Deep Purple, the Cult, Nirvana, and Pearl Jam, among many others.

The band’s debut is typically referred to as Led Zeppelin I seeing as how Page was just too damn lazy to properly name any of their first four albums. Nevertheless, it was a first in many ways, picking up the blues-rock mantle that had been abdicated by Cream and taking it into unforeseen and exciting territory. The shotgun guitar licks and rumbling drumbeats that open “Good Times Bad Times” were a revelation upon first hearing them, the song’s fluid groove displaying a soulful funk that would later inform bands like the Tommy Bolin/Glen Hughes-era Deep Purple and set the stage for an entirely new hard rock sound.

The band’s harmonies here are crisp, Page’s guitar solos devastating, and Bonzo’s percussion delightfully bombastic. Plant’s vocals are somewhat muted, although he does cut loose near the end of the song, displaying some of the passion and the power that he would bring to the band’s rockers. By contrast, the sound of “Babe I’m Gonna Leave You” is downright atmospheric, Page’s intricate guitarplay matched in the intro by Plant’s plaintive vocals; throughout the song, a curious vibe is retained, mixing sly Robert Johnson lyrical references alongside the guitarist’s sparse fretwork. When the entire band does explode, it’s a resounding slap to the face, the song successfully pairing hard rock and blues with the sort of uniquely British folk-rock sound that Page obsessed over so perfectly on Led Zeppelin III.


Back To The Blues

Page revisits his blues roots with a cover of Chicago blues legend Willie Dixon’s “You Shook Me,” a smoldering mid-tempo rocker that is amped-up and provided a fine vocal performance by Plant, deliberately plodding rhythms by Jones and Bonham, and shards of electrifying guitar courtesy of Mr. Page. Jones adds a little organ almost halfway through, his keyboard riffing adding a bit of Stax Records-styled soul to the song’s bluesy undercurrent. Plant’s harmonica play here won’t be mistaken for Little Walter, or even Big Walter, but it’s effective in this setting and not entirely inappropriate.

Another Dixon tune, “I Can’t Quit You Baby,” opens with a punctured wail before settling into a guitar-fueled blues dirge that channels all its heartbreak through Page’s nimble fingers and Plant’s anguished vocals. Page’s solos on “I Can’t Quit You Baby” are both a throwback to the sort of Muddy Waters/Buddy Guy guitarplay he cut his teeth on, but also a contemporary sophistication that clearly pointed the way towards a new future. The classic “Dazed and Confused” was “inspired by” folk-rocker Jake Holmes, and while we can debate for hours how much of Holmes’ song was “borrowed” by Page for his “original” take, the fact is that Holmes never sounded quite like this.

As a producer, Page was quite comfortable in the Captain’s chair, and he brings his studio acumen to the construction of a mysterious, alluring vibe for “Dazed and Confused” that is supported nicely by Plant’s haunting vocals, and the guitarist’s multi-layered soundtrack. The song evinces a psychedelic influence among its blues and folk roots, with an overall complexity and dark elegance that would influence an entire crop of British new wavers a decade later. Page’s incredible solo nearly 2/3 of the way through is fueled entirely by madness, a sonic tsunami that none of us had ever heard before, and only infrequently since.

The Page/Jones composition “Your Time Is Gonna Come” opens with Jones’ churchy organ run, a chiming drone that lingers in the air as it fades into an almost pastoral song of heartbreak and betrayal that is not dissimilar, thematically, to the band’s later not-so-obscure B-side “Hey Hey What Can I Do.” Plant’s vocals ride mournfully above Page’s elegant fretwork, while the song’s group chorus seems both appropriate and oddly out of place. The song’s framework is deceptively intricate, with fascinating layers of textured guitarplay, ethereal keyboards, and rolling drumbeats. The song fades into and o’er top of Page’s short, spry instrumental “Black Mountain Side,” a folkie-influenced bit of complex and exhilarating finger-picking that rivals masters like John Fahey or Sandy Bull.

The short, sharp shock of “Communication Breakdown” is exceptionally jarring, coming as it does hot on the heels of the gentle “Black Mountain Side.” As Page slaps out the song’s now-familiar riff, Plant’s vocals take flight above the steely rhythms, the song choogling along at a machinegun pace, offering no quarter to the listener as Page’s wiry solo scars your psyche and numbs your eardrums. The song roars to a fading close at two and a half-minutes, the band cramming the entire next decade of rock music into a radio-friendly blues-rock riot. Led Zeppelin I closes with “How Many More Times,” a bluesy shuffle that display’s Bonham’s percussive skills as well as illustrating Page’s six-string mastery with a raucous blast of electric fury.

Unlike the lightning bolt that was “Communication Breakdown” in its fury, “How Many More Times” strikes more like a barrage of gunfire. Stretched out to almost eight and a half minutes, the song displays every member of the band’s immense instrumental skills. Page’s guitar soars like a hungry bird of prey, exploring unknown sonic turf while he re-writes the rules of rock guitar that had been believed to have been previously carved in stone by Mr. Clapton and Mr. Hendrix. Bonham’s drumming is provocative and, often times, deceptively subtle, while Jones’ steady bass playing is both imaginative and provides a solid foundation on which everything else builds upon.


How Many More Times 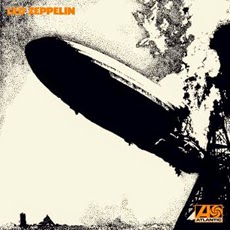 Plant’s vocals on “How Many More Times” are, of course, magnificent, jumping from one high-flying cloud to another and opening the door for leather-lunged shouters like Freddie Mercury and David Coverdale to stroll through years later on their way to considerable success. The song rolls rapidly down the tracks before evolving into the (uncredited) Booker T & the MG’s R&B classic “The Hunter,” best-known as recorded by blues giant Albert King and previously waxed – a year previous – by fellow contenders for the British blues-rock throne Paul Rodgers and Free. Yikes!

This deluxe reissue of Led Zeppelin I includes a bonus disc with a previously-unreleased live show from France. Capturing the band performing at The Olympia in Paris less than two weeks before the release of their sophomore effort, the creatively-titled Led Zeppelin II, the concert is ostensibly presented here in its entirety (roughly 71 minutes) and the setlist features songs from both discs. It opens with a mash-up of “Good Times Bad Times” and “Communication Breakdown” that rolls at the speed of light, the band’s ramshackle performance a welcome blur of perpetual motion, endless chaotic instrumentation, and sonic overkill.


Live At The Olympia

Dixon’s “I Can’t Quit You Baby” is provided an extended, guitar-heavy and somewhat busy arrangement on the stage, providing more of a showcase for Plant’s vocals and Page’s guitar explorations. “Heartbreaker” is the first tune performed from the (then) upcoming album, an eardrum-busting flurry of monster riffs, amped-up vocals, explosive percussion, and rollicking rhythms. The performance is spot-on, building on the energy of the studio version with crashing cymbals and screaming guitar licks that create a wall of joyous noise behind the singer. “Dazed and Confused” is made even eerier, if possible, in the live setting; shorn of Page’s studio wizardry, the onstage arrangement plays up the dark vibe of the studio version, relying more on Plant’s wavering vocals and well-timed, well-played instrumentation.

Live At The Olympia is the first appearance, perhaps, of “White Summer,” as performed by Zeppelin. Paired with the first album’s “Black Mountain Side,” the exotic “White Summer” was an Arabic-influenced instrumental Page adapted from a British folk song and first recorded with the Yardbirds. He would later incorporate passages of the song into “Over The Hills and Far Away,” but here it’s given a breathtaking performance that highlights Page’s virtuosity and allows the rest of the band to take a break. “Moby Dick,” from Led Zeppelin II, provides Bonham with an extended solo to display his thunderbolt drumming technique while “How Many More Times” is given a scorching performance, with Plant’s lusty vocals rolling sanguinely alongside the smothering rhythms while Page’s guitar pierces the veil with jagged shards of sound.

Let’s be honest, shall we? Some 45 years after its initial release, there’s not much new to say about Led Zeppelin I, even if I’ve taken some 1,900+ words to say it anyway…this is classic, influential, timeless rock ‘n’ roll that would change the course of pop music forever. The CD re-mastering sounds good to my ears, capturing the electricity and dynamism of the album perfectly without losing the highs and lows, and the inclusion of the unreleased, albeit frequently-bootlegged performance in France is a nice addition. Overall, if you’re a long-time Zeppelin fan sitting on your old CDs, perhaps it’s time to upgrade; and if you’re a newcomer to the band, or just curious, this album is where the legend began. (Atlantic Records, released June 3, 2014)