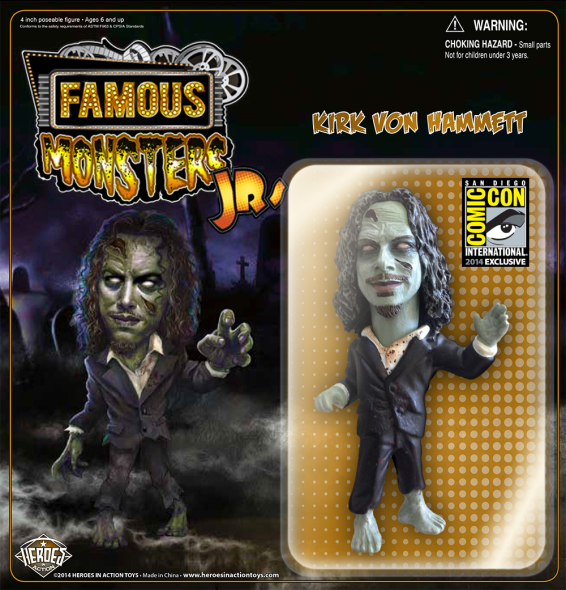 Since this is pretty damn cool, I'm just going let the press release do the talking:

Kirk Von Hammett Toys is proud to present the Famous Zombies Jr. limited edition toy at the year's San Diego Comic Con. The very limited edition green Hammett figure will be available exclusively at San Diego Comic Con, and Kirk will be signing the toy itself at the Nuclear Blast Records/Stern Pinball/JSR merch SDCC booth 503 on Friday July 25th from 1pm to 2pm, and on Saturday July 26th from 2pm to 3pm.

Fans will be able to purchase tickets starting on Wednesday July 23rd for the Friday appearance. Once Friday's tickets are sold-out, Saturday tickets will be released. Tickets are available at the Nuclear Blast Records/Stern Pinball/JSR merch booth (503).

"I'm stoked to be bringing more exclusive wares to the San Diego Comic Con," says Kirk Von Hammett himself, "Nuclear Blast have been friends for quite some time, so I'm happy to be able to bring one of my exclusives to their booth. Being a fan of comics and movies since I was a kid, it's just a huge honor to be at Comic Con on both sides, selling and buying!"

Be warned, only a strict 300 of these Nuclear Blast Green collectible classics will be available, so act fast to make sure you're in line for yours!

Find out more about Hammett's horrible predilections at Fear Festival.com
Posted by Rev. Keith A. Gordon at Friday, July 11, 2014