CD Preview: Climb on board the Mothership with Guru Freakout! 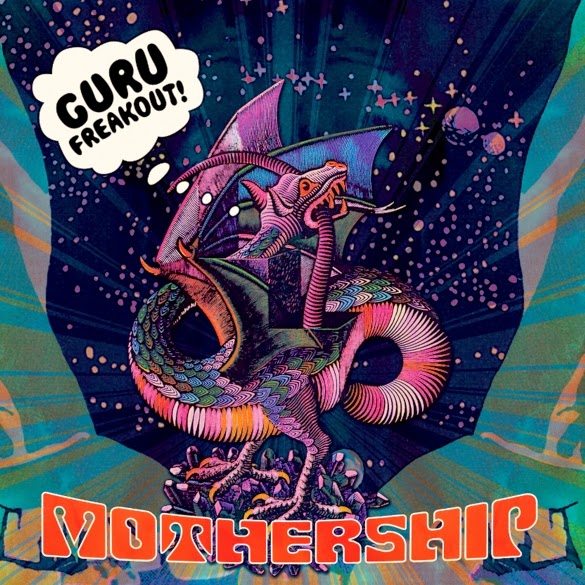 Almost 40 years after its critical and commercial ascent, the progressive rock sub-genre known as “Krautrock” continues to intrigue and excite listeners. At its height in the mid-1970s, the German-based phenomena counted bands like Can, Kraftwerk, Amon Düül, and Cluster at the forefront of the experimental, largely electronic-based musical revolution. Formed in 1970, Guru Guru was one of many memorable bands from the era, and for almost a decade and with several albums, they exploded the expectations of what music could be.

Mani Neumeier – Guru Guru singer, keyboardist, and drummer – it still kicking around and making mad music, and he has teamed up with multi-instrumentalist Jürgen Engler of German industrial noisemakers Die Krupps and bassist Scott Telles of the band ST 37 for a new project called Guru Freakout. On September 2nd, 2014 Cleopatra Records will release Mothership, the debut album from Guru Freakout.

In a press release for the new album, Engler tells how the band was formed. “Mani is an old friend of mine,” he says. “Near the end of 2012, he came to visit me in Austin where I had organized a show for him to play. We also planned to do some recording for a follow up project to Cosmic Couriers' Other Places, which was released on Cleopatra in the ‘90s.”

“At the same time,” says Engler, “I was working with bass player Scott Telles of ST 37, and when Scott heard that Mani was in town, he wanted to meet him since he had always been a big fan of Guru Guru. So the three of us got together at his rehearsal studio and started jamming right away. We had a great chemistry, so we decided to record a few tracks with a little digital recorder, and also at Ohm Recording Studio. When we listened to the tracks later, we realized that we had some really good material that should see the light of day, and so those recordings became the Guru Freakout album.”

The album features two lengthy free-form jams, including the 30+ minute “Notre Dame (Mothership)” and the extended-length “The Snows of Mt. Bonnell,” which takes up the other side of the album’s vinyl release. Both songs feature Engel’s hypnotic, psychedelic blues guitar; Neumeier’s thundering percussion; and Telles’ throbbing bass lines that, when woven together, create some tasty “stoner rock grooves” (sez the press release). The CD release of Mothership includes three bonus tracks, including studio rehearsals of “A Little Bit Spacier” and “Elektrolurch-Mutation,” as well as a live version of “Elektrolurch-Mutation.” If you’re up for taking a ride through the cosmos, Guru Freakout might be what you’re looking for!