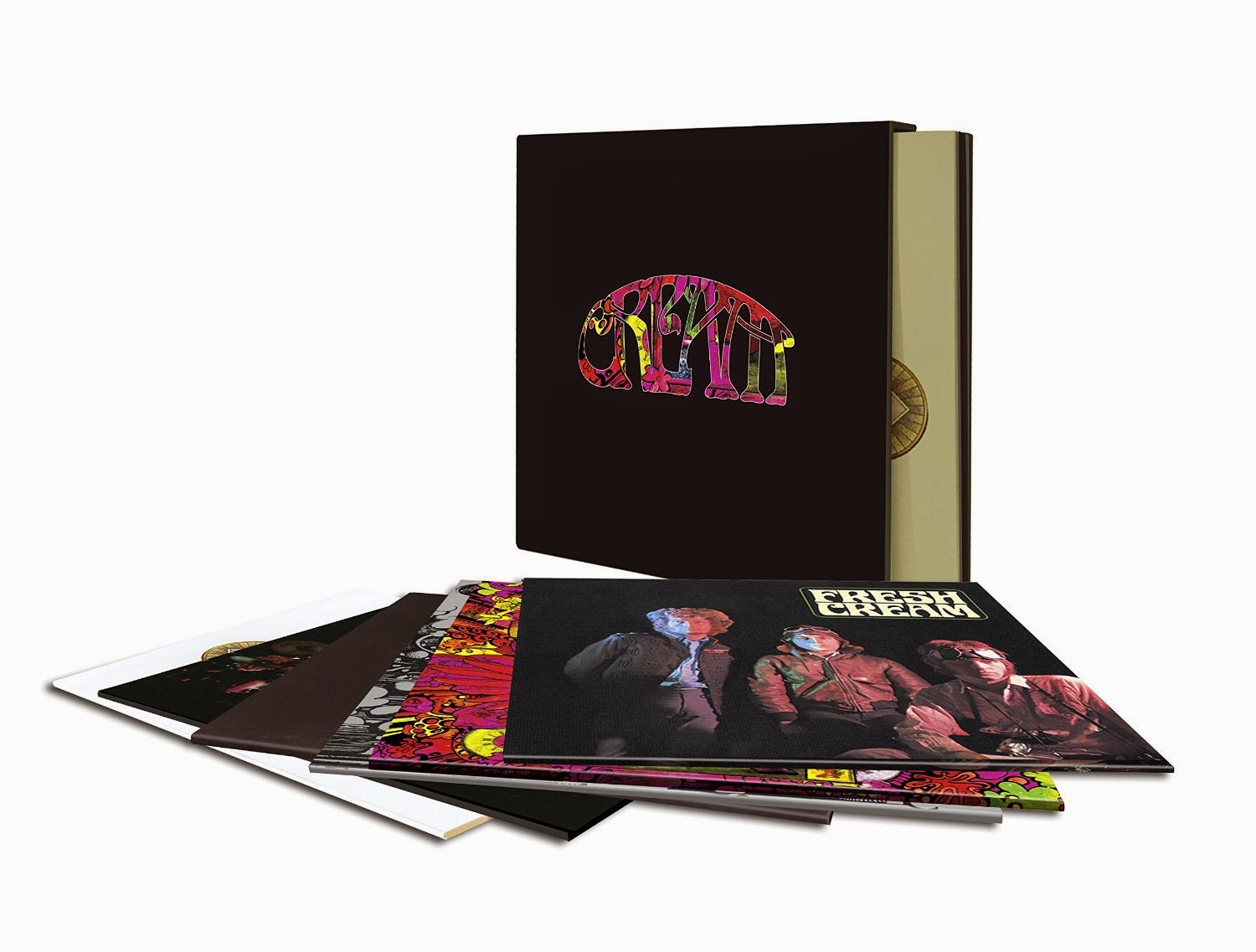 Here’s a fine present that any classic rock fan would salivate over finding underneath their tree come Christmas morning. On November 24, 2014 Universal Music will release Cream: 1966-1972, a seven-disc vinyl box set that includes all six of the legendary British blues-rock band’s four studio and two live albums pressed onto 180-gram heavyweight audiophile vinyl, with exact reproductions of each album’s original artwork, all of it gloriously packaged in a rigid slipcase box.

Formed in 1966 by guitarist Eric Clapton (fresh off stints with the Yardbirds and John Mayall’s Bluesbreakers), bassist Jack Bruce (another Bluesbreakers alumni), and drummer Ginger Baker (via the Graham Bond Organization), Cream was one of the first “supergroups” on the British blues-rock scene. The erstwhile power trio revolutionized rock music by combining elements of blues, hard rock, and psychedelic rock, as well as elements of jazz in the creation of a unique and exciting new sound that, nearly fifty years later, still thrills listeners with its bold instrumentation and imaginative lyrics, frequently penned by poet Pete Brown.


Cream had a monster hit single right out of the box with the Jack Bruce/Pete Brown song “I Feel Free,” following it up with their 1967 debut album Fresh Cream a few months later. The album featured a number of original songs, covers of vintage blues gems like Skip James’ “I’m So Glad,” Muddy Waters’ “Rollin’ & Tumblin’,” and Willie Dixon’s “Spoonful,” which drove the album to number six on the U.K. charts and into the U.S. Top 40.

By the end of the year, Cream would release the band’s landmark Disraeli Gears album, its striking psychedelic Martin Sharp cover art masking a phenomenal set of songs, the album racing up to number four on the U.S. album chart on the strength of the hit single “Sunshine of Your Love.” The album offered up other classic rock tunes in “Strange Brew” and “Tales of Brave Ulysses” that further re-worked the blues idiom into a fresh, remarkable new sound.


If Disraeli Gears was Cream’s creative apex, the band’s 1968 album Wheels of Fire would be their commercial peak. A whopping two-album set (a rarity at the time), Wheels of Fire sat at number one on the U.S. album chart for a month and hit number three on the U.K. chart, spawning hit singles in “White Room” (#6) and a live cover of Delta blues legend Robert Johnson’s “Crossroads” (#28), which has since become Clapton’s signature song. One disc of Wheels of Fire was comprised of new studio recordings (including covers of Albert King’s “Born Under A Bad Sign” and the Mississippi Sheiks’ “Sittin’ On Top Of The World”) while the other disc offered four extended live tracks from the Fillmore West in San Francisco. The LP moved a lot of flapjacks, too, certified Gold almost immediately upon its release.

By the time of the release of Wheels of Fire, tensions in the band (particularly between Bruce and Baker), as well as the exhausting touring done by the band over the previous two years, led to an inevitable break up. The band performed a farewell tour in late 1968, concluding at the Royal Albert Hall in London in November before calling it quits. Not willing to give up a cash cow, however, the label coaxed the band back into the studio to record a few tracks, which resulted in Cream’s final studio album, Goodbye, released in March 1969. A mix of live and studio tracks, Goodbye shot up to number one in the U.K. and number two on the U.S. chart on the back of the hit single “Badge,” the song co-written by Clapton and George Harrison, who played rhythm guitar on the session under the name L’Angelo Misterioso.


Two posthumous Cream albums were released after the band’s break up, the first in 1970 (Live Cream), which included performances from the Fillmore West and Winterland in San Francisco circa 1968, along with one lone studio recording (“Lawdy Mama”). The second, Live Cream Volume 2, was released in 1972 and included more Winterland ’68 performances along with three 1968 performances from the Oakland Coliseum. Both live albums would chart in the Top 30 on both the U.S. and the U.K. charts. Since then, a steady stream of anthologies and compilation albums would be released to capitalize on the band’s legacy, including a ten-track Best of Cream in 1969 (with its vegetable cover art - I totally had this LP!) and the double-album set Heavy Cream in 1973, as well as a 2003 collection of the band’s BBC radio performances.

Eric Clapton, of course, has gone on to a lengthy and storied solo career, as well as recording landmark albums with supergroups Blind Faith and Derek and the Dominos. Jack Bruce and Ginger Baker have found less commercial success during the years, but are both still making fine music (Bruce’s critically-acclaimed 2014 album, Silver Rails, is brilliant). In 2006, Cream received a Grammy® Lifetime Achievement Award, and the band was inducted into the Rock & Roll Hall of Fame in 1993. The band’s 2005 reunion shows in London and New York City sold out in less than an hour, attracting fans from across the globe.

Cream: 1966-1972 brings the band’s immense musical legacy full-circle, once again capturing on vinyl the magic and the band chemistry that mesmerized listeners in the 1960s for a new audience to discover.

That would be a lovely box to own! I wonder why Amazon's date is nearly a month after the official release date?