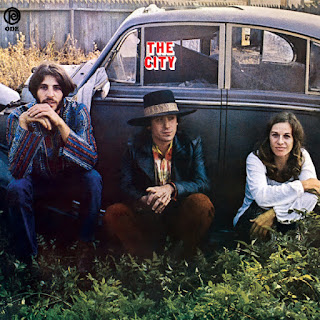 The good folks at archival label Light In The Attic Records have plucked a real gem from obscurity for their next CD/LP release – The City’s Now That Everything’s Been Said. Originally released in 1968 by producer Lou Adler’s Ode Records, the band comprised singer and pianist Carole King, bassist Charles Larkey, and guitarist Danny Kortchmar (with help from drummer Jim Gordon). The album didn’t really go anywhere and failed to chart; a year after its release, when Ode switched distributors, Now That Everything’s Been Said was deleted from the catalog and not reissued again until it appeared on CD in 1999.

At the time, although she had recorded some singles of her own, Carole King was best known as one-half of a mega-successful Brill Building songwriting team with her husband Gerry Goffin. With King creating music that featured her distinctive melodies, and Goffin penning the lyrics, the pair scored a slew of hits in the mid-to-late ‘60s with artists like Aretha Franklin, the Drifters, the Monkeys, and even King’s babysitter, Little Eva. When the duo’s marriage broke up, King moved to Laurel Valley with future husband Larkey and created the City in an attempt to jump start her long-dormant music career.

Fate had different plans for Ms. King, however, and after the City’s lone album crapped out, she started a proper solo career that, two albums in, blew up big-time with the 1971 release of Tapestry. The album would hit number one in the U.S. and Canada and number four on the charts in the U.K. on the strength of its chart-topping hit “It’s Too Late,” launching King’s solo career into the stratosphere as the album eventually went 10x Platinum™.  A string of a half-dozen hit albums would follow, King becoming the most commercially successful female artist of the decade. Her star would begin to recede in the ‘80s as mainstream musical tastes moved away from her sort of singer-songwriter fare, but she’s continued to make music, most recently scoring a Top Ten album with Live at the Troubadour, recorded in collaboration with longtime friend James Taylor.

As for the City, Now That Everything’s Been Said displayed King’s songwriting acumen in a band setting, the accompaniment by Kortchmar (a talented guitarist who would make a name for himself playing with folks like James Taylor, Warren Zevon, and Jackson Browne as well as on King’s solo albums) providing invaluable balance to King’s piano and vocals. King’s stage fright prevented the band from touring in support of Now That Everything’s Been Said, which was released two or three years too early to capitalize on the 1970s-era West Coast singer-songwriter boom. The album’s disappointing sales weren’t due to a lack of quality material, however – several songs from Now That Everything’s Been Said would result in hits for other artists, including the Byrds (“Wasn’t Born To Follow”); Blood, Sweat & Tears (“Hi-De-Ho”); and James Taylor (“You’ve Got A Friend”).

Light In The Attic’s long-anticipated reissue of Now That Everything’s Been Said features 24 bit/96 kHz re-mastering from the original master tapes, and new liner notes by writer Steve Hochman that include interviews with the band members and producer Adler. This represents the first official vinyl reissue of the album in 45+ years (yes, there were numerous counterfeit copies floating around in collectors’ circles in the late 1970s and throughout the ‘80s), available in limited edition gold wax as a LITA subscriber exclusive, and black & white haze wax for those that pre-order the LP from the label.

The Reverend has to admit a certain fondness for The City’s lone album…a former flame and Carole King fanatic had originally turned me onto Now That Everything’s Been Said which, in the wake of King’s enormous solo success and the album’s poor sales, had made it a rare, expensive, and sought-after vinyl collectible by the late ‘70s. Imagine my surprise when, moving to the Detroit area in 1979, I discovered five copies of the album in a local record store (which never sent anything back to their distributor) at $5 each! I bought ‘em all up, keeping one and selling the rest at $25 a piece at Detroit-area record conventions…the profits of which were promptly reinvested in Springsteen bootlegs. If you’re a fan of introspective 1960s and ‘70s rock music, the City will be right up your alley…

Buy the CD from Amazon.com: The City's Now That Everything's Been Said