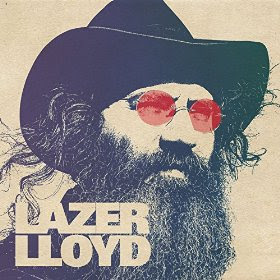 I’ve long heard it said that blues music is an international language, and it seems to be true. You’ll find a thriving blues scene in the U.K. and northern Europe, thousands of miles away from its Delta roots. Hard-touring road warriors like Walter Trout and Joe Bonamassa have spread the gospel of the blues to corners of the world, like Southeast Asia, that hadn’t yet heard the word. In over 40 years of covering music, however, much of it spent in thrall to the blues, I had never heard of blues coming from the Middle East until I heard Mr. Lazer Lloyd.

Lazer Lloyd – for those of you who have yet to discover this talented singer, songwriter, and guitarist – brings the blues from Israel. An American by birth, Lloyd was raised in Madison, Connecticut and taught a love of music by his father, who exposed the future musician to blues, folk, rock, and jazz, all vital elements of his current sound. Lloyd began playing in his first bands as a teenager, and migrated to his adopted homeland a few years ago, finding an eager audience for his intelligent songs and dynamic, charismatic performance style.

He released his first album, Lazer Lloyd Unplugged – Blues In Tel Aviv in 2011, following it up with My Own Blues in 2012, which was honored as the best blues album of the year by the Israeli Blues Society. Lloyd’s acoustic Lost On The Highway album was released in the U.S. in 2013 by Blue Leaf Records, leading to a North American tour. In other words, Lloyd is a veteran bluesman with a few miles on his odometer.


Lazer Lloyd, the album, was released by the Chicago-based independent Lots of Love Records label, which doesn’t seem to have anyone other than Lloyd on their roster, which is cool by me. If you’re going to launch a label, you may as well start with a good ‘un, and Lazer Lloyd is a revelation, indeed. The album features twelve red-hot tracks, eleven of them original, the lone cover an inspired take on Otis Redding’s classic “(Sittin’ On) The Dock of the Bay.” Lloyd eschews the usual, by-the-books reading of the timeless hit, his somber vocals displaying an enormous emotional depth, a weariness that is accompanied by his nicely elegant acoustic fretwork. He knows he’s not going to match Redding’s version, so he infuses the song with his own personality while holding onto the bittersweet elements of the original.

Lloyd’s original “Burning Thunder” kicks off the album, his slash ‘n’ burn electric guitarplay providing the muscle to his powerful, albeit oblique lyrics. His solos are as sharp as a stiletto, his deep, rich vocals backed by a crescendo of bass notes and explosive drumbeats. The tongue-in-cheek autobiographical “Rockin’ In The Holy Land” tells of Lloyd’s move to Israel with an up-tempo, rockabilly-tinged soundtrack that features some snappy harmonica lines, a locomotive rhythm, and livewire guitarplay. By contrast, the self-referential “Never Give Up” is a thoughtful ballad that reminds of Jeff Healey, with sharp, clean guitar solos and softer, more considered vocals wrapping around inspirational lyrics that carry a positive message for all of us.

The bluesman goes caveman on us with the dino-stomp wonder of “Out of Time.” Although the song’s lyrics are based on traditional blues, albeit with a contemporary tilt, musically the song is an edgy, raucous construct – all sinew ‘n’ bones with stunning, chaotic guitars and sledgehammer rhythms, with powerful vocals and an overall 1970s arena-rock sound that sits comfortably alongside Pat Travers or Robin Trower’s best work. The tearful “Broken Dreams” is a clever note on lost love with beautiful guitar tone and trembling vocals that make for a timeless performance. The haunting “Moroccan Woman” brings an exotic air to the album, with sparse lyrics and an overall swamp-blues vibe, while “Time To Love” offers up a Chicago-styled blues sound with Otis Rush influence and a universal message that soars on the strength of Lloyd’s breathless fretwork, which veers dangerously into Jimi Hendrix territory at one exhilarating point in the song.


In my humble opinion, Lazer Lloyd is one of the most exciting blues artists to come down the track in many a year. His songs display a unique lyrical perspective; the music derived from familiar blues forms but imbued with Lloyd’s own original vision. The invigorating performances on Lazer Lloyd display a uniformly high quality of musicianship, from Lloyd’s imaginative guitarplay to the band’s masterful backing. Overall, the album is a fine, entertaining, and innovative effort from the unlikely blues hotbed of Israel. RIYL Joe Louis Walker, Walter Trout, or Coco Montoya. Grade: A (Lots of Love Records, released June 23, 2015)