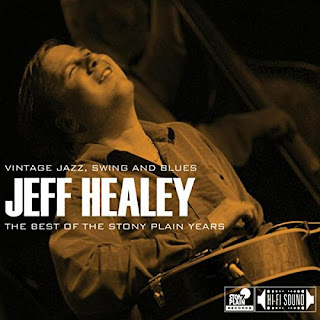 Singer, songwriter, and guitarist extraordinaire Jeff Healey wore many faces. To casual music fans, he was the singer of the hit “Angel Eyes,” a pop-blues artist who scored Top 30 albums in 1988’s See The Light and 1990’s Hell To Pay with the Jeff Healey Band. To blues fans, Healey was a solo artist, the expressive guitarist behind albums like Mess of Blues and Songs From The Road, which represented both his studio and on-stage faces, both released after Healey’s tragic death in 2008.

There was another side to Jeff Healey, however, a face known mostly to the hardcore faithful – that of the jazz master. Blind since childhood, Healey never allowed his lack of eyesight to stop him from enjoying life to its fullest. A rabid record collector with tens of thousands of 78s, Healey was a fan of 1920s and ‘30s-era American jazz, a style he pursued with gusto on a handful of albums like 2002’s Among Friends and 2004’s Adventures In Jazzland, recorded with his band the Jazz Wizards.

Truthfully, Jeff Healey was all these faces and more, an artist of many talents that may not have been a household name, but was adored by his fans and respected by the peers that he played alongside, artists like Eric Clapton, B.B. King, Stevie Ray Vaughan, Buddy Guy, Walter Trout, to name a few.

The Best of the Stony Plain Years


There has been a glut of posthumous Healey releases over the past seven years, some authorized, many of dodgy provenance, most of them derived from live performances – an atmosphere in which Healey typically flourished. The compilation album The Best of the Stony Plain Years gathers a dozen of the guitarist’s underrepresented jazz-oriented performances from those albums that he recorded between 2002 and 2008 for the Canadian label, featuring Healey on vocals, guitar, and the occasional trumpet, backed by a crackerjack band that included talents like bassist Colin Bray, pianist Reide Kaiser, and clarinetist Ross Wooldridge.

Healey’s The Best of the Stony Plain Years offers up the guitarist playing music for the sheer joy of playing. The dozen songs here will be familiar to any 21st century jazz aficionado, and there are some big names behind the music – legends like Eddie Lang, Hoagy Carmichael, and Shelton Brooks, among others. Healey’s take on the originals tends to slant towards the traditional, and there’s no hiding his enthusiasm on tracks like the classic “Three Little Worlds,” which offers up an energetic vocal performance, or “The Wild Cat,” a rollicking instrumental with machine-gun guitar pickin’, blasts of horn, and a screeching violin. Hoagy Carmichael’s “Star Dust” is a classic from the American songbook, and Healey acquits himself nicely with wistful vocals and elegant fretwork.

There are times when jazz and the blues intersect, and Healey is quite adept at those moments as well, Shelton Brooks’ “Some of These Days” concealing a bluesy undercurrent beneath the brave façade of the lyrics and Healey’s filigree guitarplay. The standard “Sweet Georgia Brown” has been recorded many times since its origin in 1925, and Healey leans heavier towards the hallowed Cab Calloway version than any others, right down to the abstract vocals. “Sing You Sinners” is a scorching slice of vintage New Orleans barrelhouse that features British music legend Chris Barber while Carmichael’s exotic “Hong Kong Blues” provides a bit of Asian flavor in its unusual syncopated rhythm, but Healey’s warm vocals and six-string gymnastics can’t help but bring a contemporary edge to the song.


While The Best of the Stony Plain Records stands entirely on its own, fans of Healey’s major label era work may be better suited looking for a mainstream release like The Master Hits collection. Those who prefer Healey in his role as guitar-slinging bluesman might find Live At Grossman’s 1994 to their liking. However, both groups – if they’re willing to experiment and listen with open ears – might find much to like in the jaunty throwback jazz of Jeff Healey’s The Best of the Stony Plain Years. Grade: B (Stony Plain Records, released July 17, 2015)

Buy the CD from Amazon.com: Jeff Healey's The Best Of The Stony Plain Years