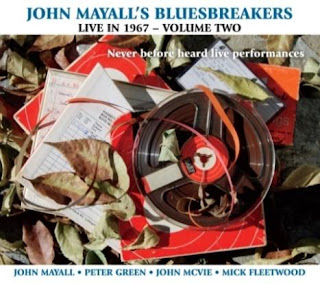 Fans of British blues legend John Mayall found a lot to like with the release of the critically-acclaimed Live In 1967 album last year. Rescued from obscurity by a hardcore Bluesbreakers fan from Holland by the name of Tom Huissen, who taped the London shows that would become Live In 1967, the album showcased rarer-than-rare, previously-unreleased recordings by the short-lived Bluesbreakers line-up of Mayall, guitarist Peter Green, bassist John McVie, and drummer Mick Fleetwood – three of whom would soon leave the band and go on to form Fleetwood Mac.

On May 6th, 2016 Forty Below Records will release Live In 1967 - Volume Two by John Mayall’s Bluesbreakers, a second highly-anticipated collection of vintage live recordings that feature never-before-heard performances by the aforementioned legendary Bluesbreakers line-up. Live In 1967 - Volume Two was produced by Forty Below’s Eric Corne and John Mayall, who also did the cover photography, artwork, and design. The pair worked from the original one-channel reel-to-reel tapes recorded by Huissen, cleaning up and restoring the sound of each performance to as close to modern sonic standards as possible from nearly fifty-year-old recordings…they ain’t hi-fidelity, but they sound good enough for rock ‘n’ roll, if you know what I mean...

Live In 1967 - Volume Two features performances recorded during the spring of ’67 at such London venues as Bromley, The Marquee Club, The Ram Jam Club, and Klook’s Kleek. Among the album’s thirteen tracks are Mayall originals like “Chicago Line” and “Tears In My Eyes” and Peter Green’s instrumental guitar showcase “Greeny,” as well as raucous covers of classic blues tunes like Sonny Boy Williamson’s “Your Funeral and My Trial” and Otis Rush’s “Double Trouble. Of the new album’s thirteen tracks, only three songs appeared on the first volume, but these new performances were recorded on different nights. A cover of the T-Bone Walker gem “Stormy Monday” features guest vocalist Ronnie Jones, a former American serviceman and original member of Alexis Korner’s Blues Incorporated band.

“I am so happy that the remaining usable tracks from these London club dates have been released as a follow-up to the well-received Volume One,” says John Mayall in a press release for the new album. “Peter Green as before is on fire throughout and this set includes a great instrumental based on his composition, ‘Greeny.’ There are a couple of Otis Rush tracks that were included on the first volume, but they are from different venues and totally different. I couldn’t possibly let these slide. With these new tracks added to the collection, it pretty much features all the material we had in our repertoire at that time and I’m very glad that you can now enjoy this great piece of rock/blues history.”