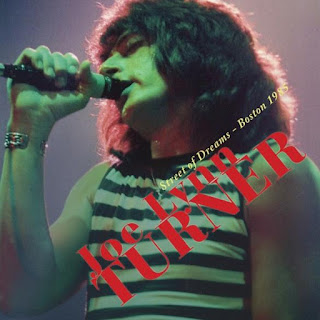 Rock ‘n’ roll singer Joe Lynn Turner has a larger-than-life voice that is equaled, perhaps, in power and glory only by his friend Glenn Hughes. Over a storied career that now spans some five decades, Turner’s has fronted legendary outfits like Rainbow, Deep Purple, and Yngwie Malmsteen’s band as well as recorded with artists as diverse as Leslie West, Billy Joel, Lita Ford, and Cher. Turner has also forged an acclaimed solo career of better than 30 years, and his voice has appeared on over 60 recordings, including better than a dozen solo studio and live albums.

On March 4th, 2016 Cleopatra Records released Street of Dreams – Boston 1985, a long-lost live Turner solo album. A year after the break-up of Rainbow, with whom Turner recorded three classic, acclaimed, and successful albums, the singer was touring in support of his solo debut album, Rescue Me. The live set includes several songs from Turner’s solo effort, as well as raucous performances of Rainbow’s “Stone Cold” and “Street of Dreams.”

In a press release for Street of Dreams, Turner recalls, “that night at the Boston Paradise, it was outstanding. I can remember seeing the audience and I remember there was an awkward pillar – I guess it was a support column in front – not directly in front, but enough to block some of the view. But the stage was an actual concert stage. Aerosmith and all those guys used to always play there, the Paradise. So I can remember actually going on and playing the set, how it felt because it was absolutely exhilarating, and the audience was just crazy.”

Turner’s solo band at the time featured guitarist Bobby Messano, bassist Barry Dunaway, keyboardist Alan Greenwood, and drummer Chuck Burgi. Turner recalls, “this was our first tour out, and I’m not sure if we were opening for someone at the Paradise, but if we were, then they had a pretty difficult time because the crowd was absolutely bananas for us, and we were hot. We were really on top of our game, the whole band and it sounds it, you can hear it, everyone is playing with incredible energy and enthusiasm and very precise.”