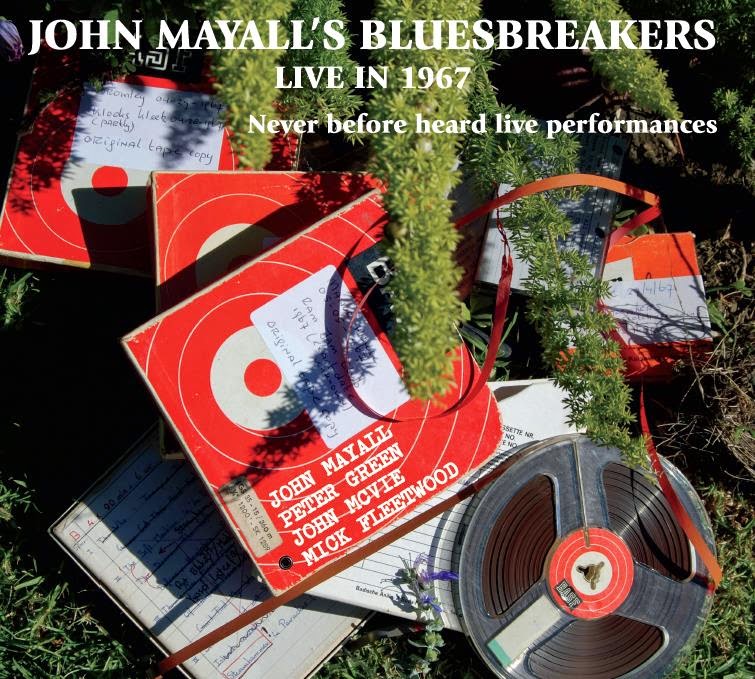 Chances are that you’ve never heard John Mayall’s first album. I know I haven’t, and although a few folks through the years have told me that John Mayall Plays John Mayall (released in 1965) is quite fetching, it’s also quite obscure, and few outside of the U.K. have had the experience. Recorded live at a London club called Klook’s Kleek, the LP featured the first draft of the classic Bluesbreakers band which included guitarist Roger Dean (who would go on to do session work), bass player John McVie (if you don’t know Mr. McVie, why are you reading this?), and drummer Hughie Flint (who would pull duty later with both Savoy Brown and the Blues Band).

What a difference a year makes, though, and when former Yardbirds’ guitarist Eric Clapton replaced Dean for the seminal Bluesbreakers with Eric Clapton album, Mayall and crew created one of the most commercially successful, critically acclaimed, and undeniably influential works in British blues music. In many ways, the album would overshadow everything Mayall would later record, so much so that few remember that the bandleader released a second, nearly as successful album a few months later. When Clapton flew the coop to barnstorm Greece for a few months, he was replaced by the capable and underrated guitarist Peter Green for the equally classic A Hard Road album.


My point is that the difference between legend and obscurity is often a combination of luck, timing, and cosmic alignment (which probably falls under the ‘luck’ category, but for the sake of argument, we’ll consider it the great ephemeral unknown). Bluesbreakers with Eric Clapton is recognized and rightfully lauded by even the most casual of British blues fans, A Hard Road not nearly as much. In the wake of A Hard Road, Mayall led various Bluesbreakers bands on tour, near-mythical shows that were seemingly fated to faded memories and eventual obscurity as none of the performances were thought to have been caught on tape.

One remarkable Bluesbreakers line-up during this period featured Mayall up front, Green on guitar, bassist McVie, and a young drummer named Mick Fleetwood. Although the four of them only played together for a few months before the three guys that weren’t Mayall bolted to form Fleetwood Mac, they performed some memorable shows together during that short time. It’s lucky for us, then, that a hardcore Bluesbreakers fan from Holland by the name of Tom Huissen tucked a one-channel reel-to-reel recorder under his jacket while attending several of Mayall’s London shows in early 1967 and recorded the band’s performance each night. These tapes remained unheard and unreleased for over 40 years until they were recently acquired by Mayall who, working with Forty Below Records’ Eric Corne, restored them to a good enough quality to release as Live In 1967.


An important note – the audio quality of Live In 1967 is less than crystal clear; it’s hollow and kind of boomy, and many performances sound like you’re standing in the back of a large, deep cave, hearing the amps echo off the paintings on the wall. Remember, however, that recording technology was in the stone age at the time and, while Huissen’s heart was in the right place, his equipment was low-fi even by the primitive standards of the time. No matter how much it’s been shined up and polished, Live In 1967 sounds like the audience-sourced bootleg that it is, and if that’s a deal breaker for your tender ears, then you probably should stop reading right now…

If you possess the intestinal fortitude to sojourn onward, however, you’ll be richly rewarded with a mighty fine performance by one of the best and brightest, albeit short-lived blues bands in old Britannia. Live In 1967 kicks off with a smokin’ read of Otis Rush’s “All Your Love.” The McVie/Fleetwood rhythm section lays down a sly groove that is embroidered by Green’s fluid guitarwork, Mayall’s soulful vocals accompanied by sparse keyboard notes to really pay tribute to the Chicago blues gem. The Bluesbreakers swing for the fences with the original “Brand New Start,” the rhythm monsters building a strong foundation atop which Mayall blows a mean harp like Little Walter and bangs the keys like Booker T. while Green unreels some greasy, soulful fretwork that sounds unlike anybody else at that time.


Returning to the Otis Rush songbook, they take on “Double Trouble,” a song so damn good that Stevie Ray Vaughan would name a band after it. With a little better fidelity (apparent across the five tracks recorded at Manor House in May), “Double Trouble” benefits from a swaying rhythm, dashes of Mayall’s mournful keyboards, and some nicely-textured and blues-drenched guitar courtesy of St. Peter. Another Manor House performance, “So Many Roads,” has become a de facto Mayall signature song. Recorded by Otis Rush in 1960 and since then by Joe Bonamassa and Foghat, among others, here Mayall and crew amp up the emotion and make the performance bolder and bluesier than anybody else, Green’s incredible guitarplay channeling more tears and heartache than his predecessor in the band ever could.

Willie Dixon’s “I Can’t Quit You Baby” is played straight, that is as an old-school Chicago blues torch song with Mayall’s saddened vocals paired with Green’s elegantly tortured guitar while the rhythm section shuffles along slowly and respectably behind the two frontmen. Mayall leads his crew through a trio of vintage Freddie King numbers – most notable among them a raucous instrumental romp through “San-Ho-Zay,” although “Someday After Awhile” is quite a tearjerker with some lovely fretwork – before finishing up Live In 1967 with a spot-on reading of T-Bone Walker’s blues standard “Stormy Monday” that features some of Green’s most nuanced string-bending.


Once you get past its limited sound quality (turn it up!), you’ll agree that Live In 1967 is a momentous musical find, a literal time capsule of classic British blues-rock. The album offers thirteen lively, inspired, and long-lost Bluesbreakers performances from a handful of now-legendary London-area clubs, including The Marquee and Klook’s Kleek, a high-energy mix of classic blues covers and Mayall originals that should thrill any British blues fan.

Live In 1967 is also an invaluable document that shines a well-deserved spotlight on the immense talents of, and all-too-brief collaboration between Messrs. Mayall, Green, McVie, and Fleetwood. While Mayall would go on to make a lot of great music during the ensuing years (including 2014’s A Special Life album), Live In 1967 proves that his legacy and the long shadow Mayall casts across the British blues tradition is based on more than just that one single album. Grade: B+ (Forty Below Records, released April 21, 2015)