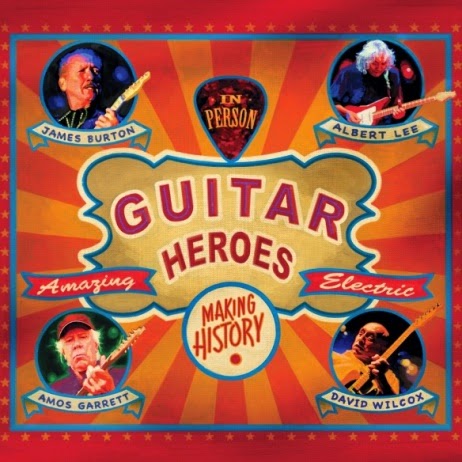 If you’re one of those That Devil Music readers that enjoys some tasty roots ‘n’ blues guitar (and, if you’re not, what are you doing here?) circle the date of May 5th on your handy Blues Images calendar. Stony Plain Records has announced May 5, 2015 as the release date for Guitar Heroes, an exciting live recording that features the talents of four acclaimed “Telecaster Masters” – James Burton, Albert Lee, Amos Garrett, and David Wilcox – who bring their collective magic to eleven classic songs.

Guitar Heroes was recorded during a one-time special performance by the four legendary musicians at the Vancouver Island MusicFest in July 2013. Backing these incredible six-string talents were members of Lee’s regular touring band: keyboardist/vocalist Jon Greathouse, bassist Will MacGregor, and drummer Jason Harrison Smith. The eleven performances documented by Guitar Heroes are presented exactly as they happened, with no editing, overdubs, or studio gimmicks – just some old friends pickin’ on an inspired mix of blues, rockabilly, and rock ‘n’ roll tunes.

The four Telecaster Masters showcased by Guitar Heroes have credentials as impressive as any musician you’ll ever hear, and nearly 200 years combined experience on the stage and in the studio. James Burton spent 11 years backing Rickie Nelson, and another eight years with Elvis Presley, and has played with everybody from Dale Hawkins (that’s him on the classic “Susie Q”), Gram Parsons, Merle Haggard, Jerry Lee Lewis, and even Nashville’s own Threk Michaels. British-born Albert Lee was a founding member of Head, Hands and Feet during the early 1970s before launching a career as a gun for hire, playing on the road and on recordings by folks like Emmylou Harris, Eric Clapton, Bill Wyman’s Rhythm Kings, and Rodney Crowell as well as recording better than 20 critically-acclaimed solo albums.

Amos Garrett is a vastly underrated guitarist who performed with Ian & Sylvia’s Great Speckled Bird, Paul Butterfield’s Better Days, Doug Sahm, Bonnie Raitt, Maria Muldaur (yup, that's him on “Midnight At The Oasis”), Jerry Garcia and others, as well as pursuing an acclaimed solo career. Canada’s David Wilcox isn’t as well known as his peers, but is one of his country’s most influential roots music guitarists, singers, and songwriters with a string of hits who has also played with Great Speckled Bird and Maria Muldaur.

Guitar Heroes will be released on both CD and on 180-gram vinyl LP with a download card; check out the full track list below.