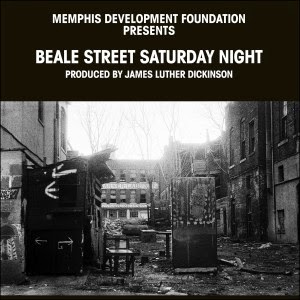 Archival experts Omnivore Recordings have struck gold before with the label’s reissues of essential albums by Memphis music legends like Alex Chilton, Sid Selvidge, and Big Star. The label will be going back down to the Bluff City one more time with the April 14th, 2015 release of the long-lost roots ‘n’ blues compilation Beale Street Saturday Night.

During the mid-to-late-1970s, the thriving musical Mecca of Beale Street in Memphis was being torn up by the city in the name of “urban renewal;” clubs were being shuttered and destroyed, and the legendary Stax Records building was demolished. Memphis songwriter, musician, and producer Jim Dickinson – who had played with folks like the Rolling Stones and Ry Cooder and who produced albums by artists as diverse as Big Star, the Replacements, and Willy DeVille – decided to capture a bit of that old Beale Street magic on vinyl.

Originally released in 1979, Dickinson produced Beale Street Saturday Night for The Memphis Development Foundation, with proceeds from the album going to help restore the legendary Orpheum Theatre on Beale Street. In keeping with the spirit of the original recording, a portion of the proceeds from this Omnivore reissue will go to Beale Street Caravan, a non-commercial radio program that broadcasts live Memphis music to an audience of 2.4 million listeners on 400 stations worldwide.

The album’s fourteen performances were recorded at a variety of venues, including the famous Ardent Studios, The Orpheum Theatre, Sam Phillips’ studio, and even Dickinson’s home with his favored Ampex 8-track tape recorder. Beale Street Saturday Night offers intimate, inspired original performances from some of the city’s best blues, roots-rock, and soul artists including Mud Boy & the Neutrons (which included Dickinson and Sid Selvidge), Fred Ford, Sleepy John Estes, Furry Lewis, Teenie Hodges, and others. The Omnivore reissue will be available on CD, as a digital download, and on clear vinyl with a download card, and will include new liner notes from Jim Lancaster (who worked on the original album), previously unpublished photos, and the original LP cover art with William Eggleston’s classic B&W photo.

The Omnivore Recordings reissue of Beale Street Saturday Night was approved and supervised by the Dickinson family and represents an important documentation of a vital and creative music scene for modern audiences. In a press release for the album, Dickinson’s son Luther says, “only in Memphis would young white record producers put such raw black music and storytelling together to create an integrated southern masterpiece. Only in the grooves of this record does this Memphis exist, the ghosts telling the stories to the kids, aged memory and youthful fantasy combining to create a world all its own. Only James Luther Dickinson could have produced Beale Street Saturday Night. World Boogie is coming.”