The Nighthawks Throw A Back Porch Party! 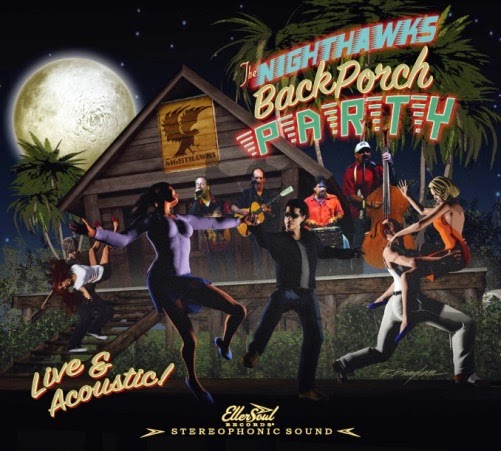 Roots ‘n’ blues veterans the Nighthawks are a respected brand with a long and storied history behind the name. Formed in 1972 by singer/harp player Mark Wenner and guitarist Jimmy Thackery, the band was part of a thriving early 1970s Washington D.C. music scene that included talents like Roy Buchanan and Danny Gatton. Through the years, the band has released better than 20 albums and rotated through a number of musicians, but they’ve always been led by Wenner’s undeniable vision and love of music.

Some 40+ years later, the band is still rockin’ and earning new fans around the world. On April 21st, 2015 the Nighthawks will be throwing a Back Porch Party with the release of their latest EllerSoul Records album, and we're all invited! Following up on their critically-acclaimed 2014 album 444, the Nighthawks – frontman Wenner, guitarist Paul Bell, bassist Johnny Castle, and drummer Mark Stutso – have put together another fine set of blues, soul, and rock ‘n’ roll with a bit of twang and R&B thrown in for good measure.

Back Porch Party was recorded “live and acoustic” in the studio, the band running through a dozen songs that include five originals as well as covers of classic tunes by Muddy Waters, Lightnin’ Slim, Willie Dixon, Ike Turner, and Jimmy Rogers. A couple of performances defy expectations, even for a band as flexible as the Nighthawks – their own version of “Down In The Hole,” better known as the theme from the acclaimed HBO series The Wire, and the Patsy Cline gem “Walkin’ After Midnight.”

As for the band’s return to an unplugged album so soon after the overwhelming critical success of the Blues Music Award-winning 2010 album Last Train To Bluesville, Mark Wenner explains the decision in a press release for the new album. “Although the band mostly continues its amplified style, they are quick to take advantage of situations that warrant the acoustic format,” says Wenner.

“Having enjoyed both the sound and father/son team of engineers in Montrose Studio in Richmond, Virginia, and mixing some acoustic numbers into the material on our 444 album, it seemed like the perfect place for another unplugged recording. The band and EllerSoul execs also invited a small group of sympathetic listeners in for the recording session. The resulting totally live performance was captured by Bruce and Adrian Olsen and quickly mixed into this presentation of a truly fun event, a Back Porch Party.”

Of course, the band will be touring in support of the new album – after all, the Nighthawks are a gang that lives on the road – and we have the initial slate of tour dates below.

Buy the CD from Amazon.com: The Nighthawks' Back Porch Party

Hot diggitty-dog!!! See you at the Shows!!
Marcus

Ever since we partied at Easters Weekend at UVA in 1980 we've known who the best blues band around are: The Nighthawks!
Can't wait to buy the album and see the Shows and hear you on World Cafe!!!
We Love The Nighthawks!
Marcus Whitehead Partlow

wow long time guys... seen you guys at carnegie hall in west virginia with hubert sumlin. i rode bike down from jersey and hung out with you guys and hubert sumlin backstage.. all the best, eddie the lock

Hey, Hey. Lookin for a cd Mark did with The Belairs.Any help would be super cool.flprw72@aol.com