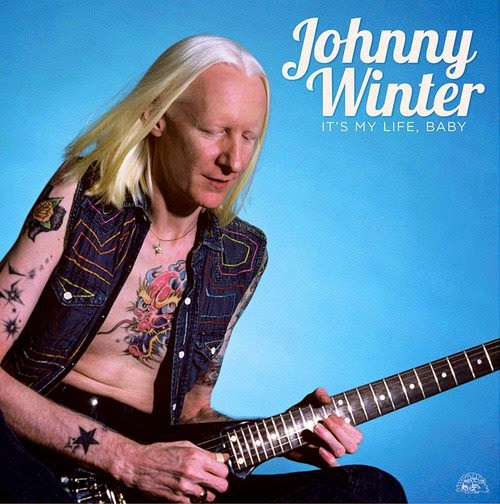 As I write, Record Store Day 2015 is slightly more than six weeks away. Collectors are taking out home improvement loans (‘cause new music does improve your home, doesn’t it?) and plotting strategies to acquire those rare RSD releases they covet, while fans of individual bands and artists are hoping that their musical idol will participate in RSD with some lil’ bit of vinyl memorabilia, whether it be EP or LP, or even a bitchin’ 7” single (with picture sleeve, of course)…

Various labels’ plans for Record Store Day are beginning to trickle out in advance of the event, and one of the first to go on the Reverend’s list is Johnny Winter’s It’s My Life, Baby – The Best of the Alligator Records Years. Winter released three superb albums for the Alligator Records label during the mid-1980s, and the esteemed blues label has put together an eight-track compilation of the best songs from those albums, pressed onto glorious 180-gram vinyl and including a download card for the album.

After leaving the CBS/Sony associated labels that he’d spent better than a decade recording for, Winter signed with Alligator after a hiatus of four years so that he could play the blues music he loved without the inflated commercial expectations he’d experience by again enlisting with a major label. His first album for the label was 1984’s Guitar Slinger, widely considered to be one of the blues-rock guitarist’s best efforts; the album also earned Winter his first Grammy™ nomination. A year later, Winter followed with Serious Business, which garnered a second Grammy™ nomination for the guitarist and charted even higher than its predecessor.

The last of Winter’s trio of albums for Alligator was 3rd Degree. Released in 1986, the album reunited the guitarist with his original rhythm section of bassist Tommy Shannon and drummer ‘Uncle’ John Turner, and also featured a guest appearance by New Orleans music legend Dr. John (a/k/a Mac Rebennack). Due to Winter’s stellar reputation, all three of his Alligator Records releases received airplay on rock ‘n’ roll radio, and his video for “Don’t Take Advantage of Me” (from Guitar Slinger) was in rotation on MTV for over six months.

Winter left Alligator when his management coaxed him into returning to a more commercial blues-rock sound; he’d record a single album for MCA Records (with synths?!) before signing with Virgin Records subsidiary Point Blank for a handful of records. Winter continued to tour and record until his death in July 2014. Winter stayed true to the blues throughout, and It’s My Life, Baby reflects some of the best music the guitarist made throughout his lengthy and acclaimed career.