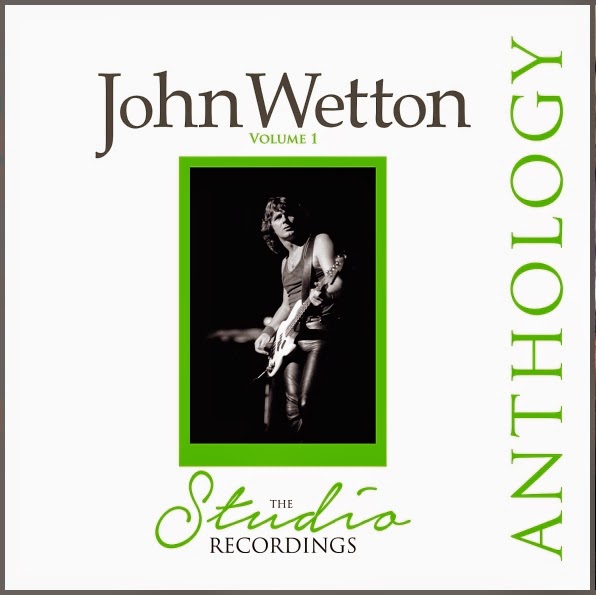 Bassist John Wetton is one of the true MVP’s of progressive rock – a prolific artist and musician who has been a major contributor to bands like King Crimson, Roxy Music, UK, and Asia as well as forging a lengthy and substantial solo career. On March 17th, 2015 Cherry Red Records will release Wetton’s The Studio Recordings Anthology, a two-disc set that features the best of the legendary bass player’s six solo albums.

Featuring performances that date from 1980’s Caught In The Crossfire to 2011’s Raised In Captivity, The Studio Recordings Anthology provides prog-rock fans with 32 songs which capture Wetton’s fluid and imaginative bass lines, soulful vocals, and mesmerizing songs. Also this month, Wetton will be releasing the live New York Minute, the album capturing a 2013 concert at the Iridium in NYC with the Les Paul Trio that features unique performances of songs like Wetton’s solo hit “Battle Lines” and Asia’s massive chart-topper “Heat of the Moment,” as well as several songs that he’s never sung elsewhere.

John Wetton first came to prominence as a member of British folk-rock legends Family, the bassist performing on the band’s classic early 1970s album Fearless and Bandstand. He would leave Family to join Robert Fripp’s King Crimson, spending several years with the prog-rock pioneers as the band’s singer and bass player, appearing on four Crimson albums, including Larks’ Tongue in Aspic and Red. When Fripp broke-up Crimson in 1975, Wetton joined Roxy Music, contributing to the band’s 1976 album Viva! Surprisingly, Wetton appeared on more of his Roxy bandmate’s albums than he did for the band itself, lending his skills to solo works by Brian Eno, Bryan Ferry (four albums), and Phil Manzanera (also four albums).

Wetton spent much of the rest of the 1970s as a journeyman, playing with bands like Uriah Heep and UK and performing session work on albums by his former bandmates Roger Chapman (Family), David Cross (King Crimson), and Crimson lyricist Pete Sinfield, among others. Wetton launched his solo career proper with 1980’s Caught In The Crossfire, and has released a dozen studio and live albums since, as well as musical collaborations with Phil Manzanera, Uriah Heep’s Ken Hensley, and Geoff Downes of Yes (as Icon).

It was with Asia, however, that Wetton found his most overwhelming commercial success, the band’s 1982 self-titled debut album yielding hit singles in “Heat of the Moment” (#4 on the Billboard “Hot 100”) and “Only Time Will Tell” (charting at #17) that made the album the best-selling release of the year. As represented by the tracks on The Studio Recordings Anthology, Wetton has enjoyed a lengthy and fruitful solo career.

If ever there was an artist worthy of a career-spanning multi-disc box set, it’s John Wetton. Until such time as that happens, if all you know of Wetton is Asia, The Studio Recordings Anthology is a great way to become familiar with Wetton’s immense talents.