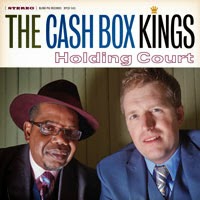 With Holding Court, the Cash Box Kings pay tribute to some of the founding fathers of contemporary blues with raucous covers of classic songs from giants like Jimmy Rogers (“Out On The Road”) and John Lee Hooker (“Hobo Blues”), as well as tunes from lesser-known but no less important artists like Big Smokey Smothers (“I Ain’t Gonna Be No Monkey Man”) and Honey Boy Allen (“I’m A Real Lover Baby”). The album also features a raft of original material that skillfully blends a variety of roots sounds with Chicago blues tradition.

In a press release for Holding Court, Nosek says “we're very excited about putting out our third release with Blind Pig. We feel that this is some of the strongest and most topical music that we've ever recorded and we're really excited to share it with the rest of the blues world. Like all our other albums, this is a 'live' in the studio recording that is primarily focused on the traditional style of Chicago blues music that we feel so passionate about.  But we also tried to touch on some of the other great American musical styles that we love like ragtime, jump blues and swamp pop. We really feel 'at home' with Blind Pig and appreciate all the support that the label has given us. We're grateful for them having faith in us and our musical vision.”