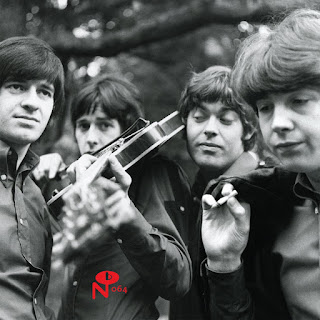 Those of you who aren’t ‘60s rock fanatics (Greg Prevost, Mike Stax, I’m looking at you guys!), may not be familiar with the Creation. One of the great cult bands of ‘60s-era British rock, the Creation were what aficionados term a “freakbeat” band, their style a unique mix of psychedelic-rock, period pop, guitar-driven garage-rock, and avant-garde experimentation rare in commercially-oriented rockers of the era. The band’s best-known tune is, perhaps, “Painter Man,” a psych-drenched, radio-ready slab o’ wax that hit the Top 40 in the U.K. in 1966 while also charting in Germany.

Although the Creation enjoyed mixed chart returns with other single releases like “Making Time,” “If I Stay Too Long,” and “Life Is Just Beginning” circa 1966-68, and they were hot stuff in Germany and northern Europe, their commercial prospects dwindled in their homeland and they were never able to find a stateside audience. Notable for American Shel Talmy (The Who, The Kinks) producing their early singles, and for musicians like Mick Avory (The Kinks) and Ronnie Wood (The Faces) passing through its ranks, the Creation drew predictable comparisons to the Who. In reality, the band pursued a unique sound created by the wandering muse of guitarist Eddie Phillips that would influence a generation of British musicians to follow, including the Jam’s Paul Weller and even contemporary Pete Townshend. What the Velvet Underground was in terms of inspiration for American rockers, the Creation was to England’s guitar-wielding youth.

The Creation never released a full-length album during their brief career, although there have been various compilations appearing in the years (and decades) since, the most notable of these being the wonderful 24-track “Our music is red – with purple flashes” CD. On March 17th, 2017 the Numero Group will release the final word on the Creation with Action Painting, a two-disc compilation available on both CD and vinyl that collects every studio recording ever made by the band, including rare U.S. single releases. All 46 tracks here have been re-mastered from the original master tapes by producer Shel Talmy; including new stereo mixes where previously unavailable.

Action Painting includes a very cool 80-page hardbound book (CD version only) featuring new essays from Dean Rudland and esteemed music historian Alec Palao that tell the band’s story in depth and details the Creations’ studio sessions. The book offers up dozens of rare, previously-unpublished photos of the band as well as four songs by early ‘60s pre-Creation freakbeat quartet the Mark Four that featured original Creation vocalist Kenny Pickett, guitarist Phillips, and future Kinks bassist John Dalton. Taken altogether, Numero’s Action Painting provides as detailed a history of this important, influential band as is possible, the set hopefully placing the Creation’s groundbreaking sound in proper context and raising their status to match that of rock ‘n’ roll contemporaries like the Who and the Kinks.

Buy the CD from Amazon.com: The Creation's Action Painting