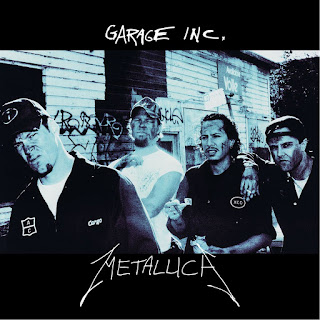 A large part of the reason for Metallica's longevity as a band and their continuously growing popularity is that they provide their audience what they want: aggressive, no frills, ass-kicking, hard-edged rock 'n' roll. Flying in the face of both conventional wisdom and industry tradition, Metallica have thrust themselves into the rarified heights of multi-platinum bands with little or no radio airplay or video presence. Relying instead on constant touring and a very deliberate recording process that produces the kind of album that the band themselves would want to buy, the not-so-secret key to Metallica's success is that they are, at their very core, music fans themselves.

Because they are fans, Metallica's collective musical closet is filled with cover tunes, B-sides and obscure songs by bands that only the hardcore are familiar with. Garage Inc. is the foursome's tribute to their influences, a two-CD collection of songs that they themselves are quite fond of. Some of the material on Garage Inc. will be familiar to Metallica fans – the band's legendary and long out-of-print 1984 The $5.98 EP: Garage Days Re-Revisited is included here on the second disc, as are numerous B-sides, many of them songs performed live on a regular basis by the band. Even at this stage of the game, releasing an album of covers – much less a two disc set – is a bit risky even for a chart-topping fan's band like Metallica. But they seem to have pulled it off, as shown by initial sales figures (which is all that matters to the label), mostly because they bring such joy, sincerity and energy to the songs on Garage Inc.


Like most affairs of this nature, Garage Inc. has its share of hits and misses. What matters here is that the band hits the bull's eye more often than not. Many of the covers here are derived from what is called the “New Wave of British Heavy Metal” (NWOBHM), a late '70s/early '80s musical phenomenon that was to have a striking affect on the various members of Metallica. So strong an influence was NWOBHM band Diamond Head that their “It's Electric,” with its soaring vocals and roaring guitars, sounds like it could very well be a Metallica original. Garage Inc. offers four of the English band's songs spread across its two discs – it seems that every time Metallica starts cranking out the covers, it's Diamond Head they turn to for inspiration. Other NWOBHM bands represented on Garage Inc. include Holocaust, Blitzkrieg, and Sweet Savage.

There are takes – some odd and some not so odd – to be found on the discs here. Black Sabbath's “Sabbra Cadabra” receives an appropriately eerie reading, Thin Lizzy's version of the traditional Irish “Whiskey In The Jar” is provided a particularly inspired performance while the Misfits' “Die, Die My Darling” is just the sort of metal-tinged punk horror story that Mr. Danzig envisioned all those years ago. Lynyrd Skynyrd, another band that had more in common with their fans than their critics or label executives, is revisited here with a somber rendering of “Tuesday's Gone” that includes guests like Blues Traveler's John Popper, Alice In Chain's Jerry Cantrell, Les Claypool of Primus, and Gary Rossington of Skynyrd, among others.

Garage Inc. is a hell of a lot of fun, and if this collection of 27 well-chosen covers inspires just one young rocker as much as the original tunes influenced Metallica, then the band has done their job well. (Elektra Records, released November 24, 1998)