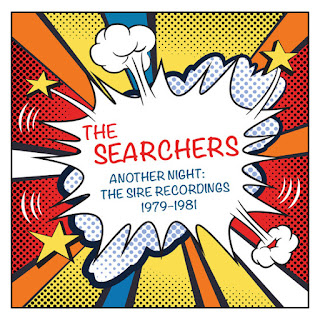 Overshadowed by competitors like the Beatles, the Rolling Stones, the Kinks, and the Who, British Invasion rockers the Searchers are too often overlooked. The band nevertheless collected almost a dozen Top 40 hits in the U.K. between 1963 and 1966, including timeless tracks like “Needles and Pins,” “Don’t Throw Our Love Away,” “Sugar and Spice,” and “When You Walk In The Room.” The hits dried up as the decade wore on, but the Searchers persevered as a touring band, playing the old songs as well as contemporary hits to enthusiastic audiences.

In 1979, the band came to the attention of Sire Records’ head honcho Seymour Stein, who saw them perform and offered them a deal with the label which, at the time, featured bands like the Ramones, Talking Heads, and the Dead Boys. Inspired musically by the early ‘70s British pub rock scene, the Searchers recorded a pair of albums for Sire, their self-titled 1979 disc produced by Pat Moran (Be Bop Deluxe, Dr. Feelgood) and offering a mix of original songs and covers of songs by artists like Bob Dylan, Tom Petty, the Records, and Mickey Jupp.

The following year, the Searchers released Love’s Melodies (released as Play For Today in the U.K.). Produced by Ed Stasium (The Ramones, Talking Heads), the LP featured more exhilarating original tracks as well as covers of rockin’ tunes from artists like Moon Martin, Big Star, John Fogerty, and others. Neither album performed well commercially, the label dropping the band as they prepared to record a third album. History has smiled kindly on the Searchers’ two Sire recordings, though, which have been released several times around the world with different track lists, B-sides and mixes, though sadly both albums have been out-of-print for better than a decade.

On December 8th, 2017 Omnivore Recordings will release Another Night: The Sire Recordings 1979-1981, a two-disc compilation that empties the vault of what many consider one of the Searchers’ most productive and inspired periods. The set includes all twenty-two tracks from the original two albums and adds seven alternative takes and outtakes, including a previously-unreleased cover of John Hiatt’s “Ambulance Chaser.” The package also features album cover artwork from various previous releases as well as an essay by writer Scott Schinder with new interviews with band members Mike Pender, John McNally, and Frank Allen. Check out the album trailer below and then check out Another Night, a fine collection by the long-forgotten British Invasion hitmakers the Searchers.