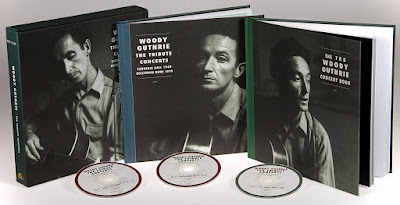 Woody Guthrie is widely considered – and rightfully so – as the Grand Daddy of Americana music. Guthrie’s career was incredibly short, considering his accomplishments, spanning from the early ‘30s until the late ‘50s, when Huntington’s disease rendered him unable to perform until his too-young death in 1967 at the age of 55 years. Still, Guthrie wrote hundreds of songs during his relatively brief career: political songs, children’s songs, ballads, and folk songs, many of which have since become standards of the genre. Informed by his own Dust Bowl upbringing and westward migration during the ‘30s, Guthrie’s songs championed the working man, his left-leaning (and frequently political) lyrics biting the hand of company bosses and craven politicians with caustic wit and acidic poetry. Guthrie’s songs were extremely influential, and have been recorded by artists as diverse as Bob Dylan, Johnny Cash, Bruce Springsteen, Pete Seeger, Joe Strummer, Billy Bragg, and the Grateful Dead, to name a few.

Guthrie’s influence can best be heard in Dylan’s lyrics, Woody teaching the young guitar player from Minnesota that songs could be poetically profound, and you can hear Woody’s influence echo in the music of such disparate artists as the Clash, Rage Against the Machine, and Ani DiFranco, among many others. Before his death, friends and family had begun organizing a tribute concert in the artist’s honor, with proceeds to be donated to the newly-created Woody Guthrie Foundation (established by his widow Marjorie, the mother of musician Arlo Guthrie) to create an archive for the singer/songwriter, and to support research into Huntington’s disease, an effort that continues to this day. Bear Family Records has a reputation for quality reissues, and they’ve certainly outdone themselves with this deluxe repackaging of the previously-released (albeit long forgotten) performances, which have been released on both vinyl and CD, but never like this...


Woody Guthrie – The Tribute Concerts is a three-CD box set comprised of both performances that were given in honor of the singer/songwriter. The first disc documents a January 1968 show from Carnegie Hall in New York City while the other two discs feature a sequel, of sorts, as a second Guthrie tribute concert was held at the Hollywood Bowl in 1970. The Carnegie Hall show sounds like a wonderful affair, a veritable “who’s who” of ‘60s-era folk musicians performing including Pete Seeger, Judy Collins, Tom Paxton, the legendary Odetta, and Richie Havens (still a year and a half away from his Woodstock moment) as well as Guthrie acolyte Bob Dylan and his son Arlo. The performers were backed by the musicians who would become known as the Band, who had been playing behind Dylan circa 1966-67 and would release their debut album, Music From Big Pink, later that year.

Actors Robert Ryan and Will Geer (i.e. ‘Grandpa Walton’) – both friends of Woody and well-known Hollywood social activists – provide narration in between songs, offering a brief history of the Dustbowl Bard. A truncated version of Guthrie’s “This Train Is Bound For Glory” leads off the show, with the entire cast pitching in behind Seeger’s reedy vocals and Arlo’s wailing harmonica, before a bit of narration kicks in. Arlo tackles “Oklahoma Hills,” acquitting himself nicely, while Judy Collins does a bang-up job with “So Long, It’s Been Good To Know Yuh.” A vintage recording of Woody singing “Riding In My Car” is a rough-hewn, joyful thing displaying both the songwriter’s sense of humor but also his innate ability to create a melody with even the silliest of lyrics. Folk legend Odetta offers a mesmerizing read of “Ramblin’ Round,” with just her voice guitar weaving a spell that leaves the audience enchanted.

Tom Paxton brings his usual zeal to Guthrie’s “Pretty Boy Floyd,” an engaging story-song with real life inspiration, while Richie Havens delivers a haunting original, “Blues For Woody,” his sonorous voice and sparse fretwork capturing the audience’s attention. Havens’ version of Guthrie’s “Vigilante Man” is equally fraught with emotion, the singer’s otherworldly vocals perfectly capturing the song’s dark vibe. Reappearing on stage after a two-year hiatus from performing, Bob Dylan grabs the spotlight for three songs, his raw, unpolished take of “Grand Coulee Dam” barely staying on the rails; his rowdy reading of “I Ain’t Got No Home” is bluesier and more self-assured. Led by Odetta and Arlo, the entire cast closes out the show with “This Land Is Your Land,” as uplifting a performance of the classic song as you’ll ever hear, complimented by Geer’s fierce between-verses narration. 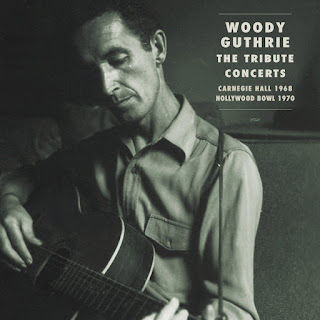 A second Guthrie tribute concert was held at The Hollywood Bowl in September 1970. Although featuring mostly the same material as the original, this show offered performances by Joan Baez, Pete Seeger, Odetta, Country Joe McDonald, Richie Havens, Ramblin’ Jack Elliott and, of course, Arlo Guthrie, with narration this time by Will Geer and actor Peter Fonda. The backing band for the concert included talents like guitarist Ry Cooder, and bassist Chris Ethridge and fiddler Gib Guilbeau of the Flying Burrito Brothers. With Cooder and John Beland providing a fine instrumental backdrop with mandolin and Dobro, respectively, Arlo delivers an even more affecting version of “Oklahoma Hills,” than in 1968. Joan Baez is joined by folk legend Pete Seeger for a lovely duet on “So Long, It’s Been Good To Know Yuh,” Seeger enlisting the audience to sing along with the well-worn lyrics.

Baez brings her hauntingly beautiful voice to bear on a chilling read of “Hobo’s Lullaby,” a song written by wandering troubadour Goebel Reeves and covered by both Woody and Arlo Guthrie. “I Ain’t Got No Home,” covered by Dylan on the 1968 show, is performed here by Seeger and Arlo to good effect, the pair swapping off vocals and bringing an upbeat tone to the wistful lyrics. Richie Havens raises thunderclouds with his powerful performance of “Nine Hundred Miles,” his tortured vocals matched by incendiary acoustic fretwork while Baez’s ethereal vocals on “Plane Wreck At Los Gatos” perfectly capture Woody’s tale of the plight of the immigrant laborer. Odetta provides “John Hardy” with a strong, upbeat vocal performance and Arlo leads the full band in a jaunty take on his dad’s “Do Re Mi.” Obscure folk singer/songwriter Earl Robinson is joined by Pete Seeger on Guthrie’s “Roll On Columbia” (based on a Leadbelly song); the two men’s vocal styles an interesting study in contrast.

More engaging is Robinson’s performance of “Mail Myself To You” on disc three, his unique vox perfectly portraying the song’s sense of whimsy. Ramblin’ Jack Elliott’s ramshackle singing of “Howdido” befits the artist’s reputation, while Country Joe McDonald’s “Woman At Home” is delivered as a raucous, electric blues-styled romp with Cooder’s stinging bottleneck guitar and a big-boned rhythm tracks that’s as scary as a fist. Arlo, Country Joe, Odetta, Baez, and Seeger gang up on “This Train Is Bound For Glory,” providing the folk classic with a gospel fervor, while the entire cast closes out the show again with “This Land Is Your Land.” The back half of disc three offers scraps of interviews, with artists like Arlo, Judy Collins, Tom Paxton, Country Joe, and Jack Elliott offering memories of Woody and the concerts. Two lengthier interviews, with Phil Ochs and Bob Dylan, provide further insight and comments on Guthrie (with Ochs being his usual irascible self).


Woody Guthrie – The Tribute Concerts offers 100 tracks across three CDs in a slipcase with two beautiful hardback books. A 160-page book offers information on both of the tribute concerts, bios of the artists, and a brief history of Woody himself as well as a providing dozens of gorgeous B&W and color photos from the two concerts for the reader to gawk at. The smaller 88-page book is literally a Woody Guthrie songbook with words and music for the songs performed during the two shows along with rare B&W photos from across Guthrie’s life and career.

Altogether, this is an impressive packaging of documenting two glorious moments in American music history, a collection that belongs on the shelf of any Woody Guthrie fan or Americana music aficionado that wants the complete story. Guthrie’s importance and influence on the evolution of American music – folk, country, rock ‘n’ roll alike – is undeniable and the joy of these artists in honoring Woody with their performances is simply contagious. Grade: A+ (Bear Family Records, released October 13, 2017)

Buy the box from Amazon.com: Woody Guthrie – The Tribute Concerts
Posted by Rev. Keith A. Gordon at Friday, November 24, 2017