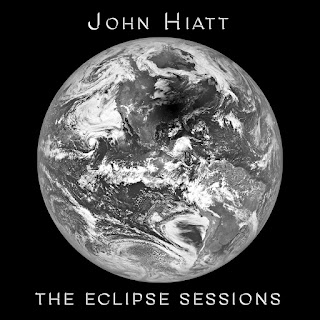 There’s not a heck of a lot of info floating around the ‘net on this one yet, but on October 12th, 2018 New West Records will release The Eclipse Sessions, the first studio album in four years from award-winning singer/songwriter John Hiatt.

The Eclipse Sessions offers eleven new songs by the acclaimed songwriter, and Hiatt considers the new album to be in the same vein as his 1987 commercial breakthrough, Bring the Family, and 2000’s Grammy™-nominated Crossing Muddy Waters. “The three albums are very connected in my mind,” says Hiatt in a press release for the album, “they all have a vibe to them that was unexpected. I didn’t know where I was going when I started out on any of them. And each one wound up being a pleasant surprise.”

Longtime fans will be happy that Hiatt is still pursuing his signature Americana sound, the new songs featuring the singer’s raw, imperfect, emotional vocals. “They ain’t pretty, that's for sure,” says Hiatt about the creaks and cracks that punctuate his phrases in songs like “Poor Imitation of God” and “One Stiff Breeze.” “But I don't mind a bit. All the catches and the glitches and the gruffness, that sounds right to me. That sounds like who I am.”

Songs like “Cry To Me,” the stark “Nothing In My Heart,” and the rowdy “Poor Imitation of God” display Hiatt’s enormous songwriting skills, while his rootsy guitar playing helps emphasize his poetic lyrics. An American musical treasure, John Hiatt proves with every new album that he’s getting better with age and experience.

Buy the CD from Amazon.com: John Hiatt’s The Eclipse Sessions
Posted by Rev. Keith A. Gordon at Saturday, September 01, 2018