Every rock band of any importance over the past forty years has influenced those who have followed. Just as the ‘British Invasion’ era of the Beatles, the Stones, and the Who encouraged hundreds...if not thousands...of American teens to pick up guitars and form garage rock bands, so too does heavy metal have its touchstone artists. None, it would seem, have enjoyed the longevity or cast as long a shadow as Black Sabbath. Sure, Led Zeppelin has its legion of followers and Metallica fans swap live recordings with the fervor of the most diehard Deadhead. Ozzy-era Sabbath, however, seemingly wrote the playbook from which damn near every heavy metal band since has nicked a page or two.

No metal sub-genre has absorbed more Sabbath influence than has “doom metal.” Ostensibly evolving out of the marshes of Mordor sometime in the late ‘70s and early ‘80s, “doom metal” and its kissing cousins – “stoner metal” and “death metal” – represent both the most creative and the most dark-natured extremes of the metal genre. Doom metal is comprised of slow, plodding power chords sharply punctuated by razor-sharp riffs, supported by explosive drumbeats, and smothering rhythms. It is brutish, blistering, lead-pipe-to-the-skull music with an unrelenting sense of purpose and those who listen to it (this scribe included) have no time for the gossip-column antics and on-stage mincing of many of today’s radio-friendly hard rock bands.


Of the many doom metal outfits born in the aftermath of Black Sabbath’s heavy metal thunder, none were as misunderstood as Saint Vitus. The Los Angeles band was formed in 1979, a longhaired, heavy metal anachronism among the city’s hardcore punk scene. It didn’t help the band’s marketing efforts any that they were signed to a punk label – SST Records, home of Black Flag – even if label head Greg Ginn did recognize the band’s talents. Early albums failed to earn the band much more than a cult following. With the addition of former Obsessed frontman Scott “Wino” Weinrich in 1986 it looked, for a moment, as if Saint Vitus might break out of the underground and achieve a modicum of mainstream success.

Unfortunately, the release of 1989’s excellent V proved to be both the band’s high mark and its swansong. Disillusioned, Weinrich left the band shortly after the album’s release to reform the Obsessed, a band that would subsequently forge its own obscure legacy and cult status. Saint Vitus carried on for another few years and a couple of albums, but never equaled the achievement of V or expanded its audience beyond a loyal following and a few celebrity fans like Dave Grohl.

Southern Lord – a label seemingly dedicated to resurrecting doom metal – has reissued V complete with bonus video you can watch on your computer. A classic of doom metal, brought back, as it were, from the grave, V belongs on the stereo of every man, woman, and child that yearns for a truly HEAVY rock ‘n’ roll experience. Think Vanilla Fudge on ‘ludes and you’ll approximate the sound of Saint Vitus. 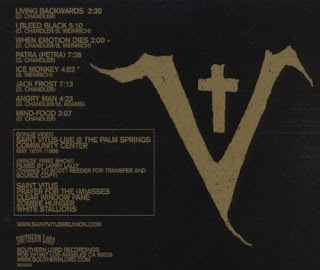 While many bands these days seem to think that they have to fill up all 80 minutes available on a CD, Saint Vitus got the job done with a mere eight songs and 35 minutes of tape. The songs are so powerful, so omnipotent that only the heartiest of listeners can withstand the full-force musical hurricane that is V. The album opens with “Living Backwards,” a charming ode to alienation that rolls out with a Sabbath-styled monster riff, Wino’s piercing vocals strangling the lyrics while guitarist Dave Chandler hits bone with his chainsaw lead.

After a mere two-and-a-half minutes of bludgeoning the listener with its warm-up song, Saint Vitus kicks in with the real shit. “I Bleed Black” sounds much like, I’d wager, the aural equivalent of a heart attack. Mark Adam’s bass throbs erratically like adrenaline ripping through your veins while Chandler’s supersonic riffs sound like some sort of interstellar voyage. The band changes pace with “When Emotion Dies,” which means that they slow down things even more with an atmosphere-heavy funeral dirge for the loss of humanity or the birth of a nation of zombies or some other such disturbing lyrical fare.

At 7 minutes plus, “Patra (Petra)” is a monster unleashed, deliberate vocals paired with painful subsonic rhythms and shot through with white hot guitar shrapnel. “Ice Monkey” lightens things up a bit, a relatively faster-paced rocker with superb guitarwork while “Jack Frost” is a loving, bass-heavy ode to the annual death of nature. V closes with “Angry Man” and “Mind-Food.’ The former is a musical cross between Dio-era Sabbath and Dio-era Rainbow with pissed-off, punk rock lyrics and scattershot six-string madness while the latter pairs psychedelic-era poetry with Ozzy-styled vocals and riff-heavy sludge-rock.


As I mentioned before, the Southern Lord reissue of V includes a nifty little perk, a 28-minute video of Wino’s first show with Saint Vitus. Shot on amateur video with all the jerky transitions and obligatory zoom shots that the medium implies, the performance – in some crappy Palm Springs community center – is nevertheless electrifying. The video does a fine job of capturing the band’s energy and power, the lens closing in on every guitar and bass solo and framing Wino’s every move with loving caresses.

There can’t have been that many people at this May 1986 show, there is no stage to speak of, no drum riser, no clean sound or light rig and yet Saint Vitus play with all the sweat and ferocity of a band headlining a stadium gig. It’s this dedication and energy that Weinrich, Chandler, Adams, and drummer Armando Acosta brought to their music that earned Saint Vitus a rabid if small fan following. V is a good example of what Saint Vitus was all about and one of the few true enduring classics of doom metal, a genre that refuses to die and continues to win over new fans each year... (Southern Lord Records, released July 27, 2004)