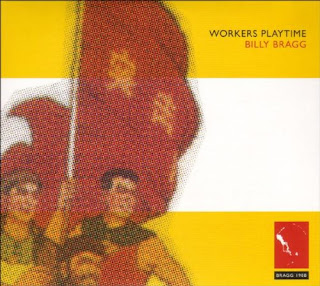 By the time of the 1989 stateside release of Worker’s Playtime, punk-inspired folkie Billy Bragg had found an unlikely measure of commercial success in the UK and had developed a loyal cult audience in the United States. Whereas Bragg’s first two albums, Brewing Up With Billy Bragg (1984) and Talking With the Taxman About Poetry (1986), featured many politically-charged songs delivered from the singer’s left-leaning perspective, they also offered up intelligent romantic commentary such as “Levi Stubb’s Tears” and “Love Gets Dangerous.” It is the tension of this dichotomy – the soapbox rabble-rouser shouting political rhetoric and the hopeless Celtic romantic singing love songs – that drives Worker’s Playtime.


Working for the first time with noted producer Joe Boyd (Nick Drake, Fairport Convention), Bragg pretties up many of the songs on Worker’s Playtime with finely tuned melodies and lush instrumentation, a stark contrast to his sparse previous work. The angry young man of Bragg’s early EPs and debut album has, a half-decade later, mellowed somewhat, allowing the romantic songwriter to come to the foreground. The result is a superb collection of material like “She’s Got A New Spell,” the melancholy “Valentine’s Day Is Over” (featuring just Bragg’s voice, guitar and a piano), and the rollicking, self-effacing “Life With The Lions.”

The most striking moment here, however, is “Waiting For The Great Leap Forwards,” the song building from Bragg’s lone piano-backed vocals to a swelling crescendo of choral voices and a grand finish. It’s the defining moment of Worker’s Playtime, an affirmation of the singer’s social consciousness. Even so, the song displays Bragg’s growing disenchantment with politics as well as his wry sense of humor. Although proclaiming that “revolution is just a T-shirt away,” Bragg asks, “will politics get me the sack?” In the end, Bragg’s surmises “start your own revolution and cut out the middle man,” evoking Dylan’s “don’t follow leaders, watch the parking meters….”

She’s Got A New Spell


Worker’s Playtime proved to be commercially questionable, fans and critics alike seemingly confused by the album’s tentative nature and artistic contradictions between the “new” Billy Bragg (stronger production, more instrumentation) and the “old” (guitar and vocals). In reality, the album’s sublime strength lies entirely in its uneasy nature, Worker’s Playtime showcasing Bragg’s evolution from street busker to self-aware musician. Somewhere between album number one and number three, Bragg realized that there might actually be a future to this music thing.

The material on the bonus disc of this excellent Yep Roc reissue – studio demos and outtakes – supports this critical perspective, showing Bragg experimenting with different ways to express his music. The demo of “She’s Got A New Spell,” with the Attractions’ Bruce Thomas and the Jeff Beck Group’s Mickey Waller, evinces a rock aesthetic while “The Short Answer” sounds like low-key Graham Parker, complete with the Rumour’s Martin Belmont on guitar. Other material, such as a stark, powerful cover of the Jam’s “That’s Entertainment” and an uncharacteristically soulful live reading of Tim Hardin’s classic “Reason To Believe” display different facets of Bragg’s talents.


In retrospect, Worker’s Playtime is a solid collection of songs that served as an invaluable stepping stone to Bragg’s work on albums like Don’t Try This At Home as well as his collaboration with the band Wilco on Mermaid Avenue. It is in these grooves that you can hear Bragg becoming comfortable in his role as artist and musician, the album an important part of the artist’s overall catalog and an influential release in its own right. (Yep Roc Records, 2006 reissue)