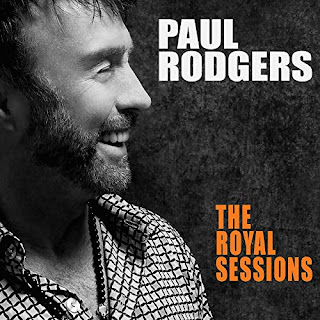 There’s no denying Paul Rodgers’ status as one of the most iconic singers in rock music. As the frontman of both British blues-rock giants Free in the 1960s and the chart-topping Bad Company during the ‘70s, Rodgers left his mark with a slew of hit singles and memorable moments. After the break-up of Bad Company, Rodgers half-heartedly launched a solo career in the 1980s that resulted in some decent music but diminishing commercial returns. The inevitable BadCo reunions would follow, as would a surprisingly good solo tribute to the great Muddy Waters. Rodgers seemed to have hit a career nadir in the mid-2000s, however, standing in for the late Freddie Mercury over several successful tours by pomp-rockers Queen.

Many of us felt that the Queen move was a waste of a great vocalist whose soul-drenched emotional howls would never be a proper substitute for Mercury’s operatic flamboyance. Rodgers may have felt the same, quitting Queen (to be replaced by Mercury’s American Idol doppelganger Adam Lambert) and high-tailing it down to Memphis, Tennessee. Within the hallowed walls of Royal Studios in Memphis, surrounded by a veritable who’s who of Bluff City musical talent, Rodgers returned to his roots with The Royal Sessions, a rock-solid collection of soul and R&B classics, many from the Stax, Goldwax, and Hi Records releases that had influenced a young Paul so many years ago in England.


Rodgers kicks off The Royal Sessions with his horn-driven take on the Sam & Dave gem “I Thank You.” Rock ‘n’ roll fans probably know the ZZ Top version better than the Stax duo’s, but there’s no denying the power and groove of the original. Rodger’s reading of the soul classic falls, stylistically, somewhere in between the original and that by the blues-rockers from Texas, his throaty vocals soaring atop the rhythms, the arrangement bolstered by the bleating of The Royal Horns and the swirling keyboard licks of Rev. Charles Hodges, Sr. (who played on records by R&B greats like Al Green and O.V. Wright). A cover of Albert King’s “Down Don’t Bother Me” is similarly enhanced by the keyboards and hornplay, but Rodgers finds a bluesier groove here and guitarist Michael Toles (who played with King and Isaac Hayes, among others) hits a the high notes, making for one groove-laden jam.

Covering Ann Peebles’ “I Can’t Stand The Rain” is pretty much a losing proposition for any vocalist, no matter how talented, but Rodgers gives it a good shot, delivering more emotion and heartbreak than many singers manage. The horns massage the anguish here rather than overwhelm it, and the keyboards chime on religiously behind the vocals. Rodgers fares better on the Otis Redding gem “I’ve Been Loving You Too Long (To Stop Now),” capturing the singer’s soul-drenched teardrops as the band embellishes the original Stax house band arrangement only slightly. It’s a fine performance, and not the last time that Rodgers would find solace and inspiration from the fate-crossed soul legend.


Memphis-born songwriter Roosevelt Jamison penned a number of memorable classics, but none larger or more influential than his beautiful “That’s How Strong My Love Is.” Written for Jamison’s friend O.V. Wright, who recorded the song in 1964, it would become a Top 20 R&B chart hit a year later for Otis Redding and later be recorded by a diverse group of rock, pop, and R&B artists including the Rolling Stones, Little Milton, Humble Pie, Bryan Ferry, Taj Mahal, and others. Rodgers takes a shot at it here and knocks it out of the park, his stunning vocal performance mimicking Redding’s, displaying all the romantic intensity of the best versions, his voice backed by lush, elegant instrumentation.

By contrast, Rodgers’ lone blunder on The Royal Sessions may be his reading of the Bert Bacharach/Hal David tune “Walk On By” (an early-1960s hit for Dionne Warwick). Blanketed in sickly strings and imbued by faint and inefficient backing vocals, the version is bereft of any melody or discerning tempo, and if not for Toles’ subtle but funky fretwork, it would be a complete wash. Luckily, Rodgers’ inspired cover of Albert King’s “Born Under A Bad Sign” provides a breath of fresh air to the proceedings. Toles lays down a nice groove while Rodgers belts out the lyrics, the guitar solos are tasteful and rich in tone, and the horns underline the instrumentation rather than dominate.

Delving again into the Redding songbook, Rodgers wraps his voice around the often overlooked “I’ve Got Dreams To Remember.” Crooning above the mournful horns and washes of keyboards and guitar, Rodgers brilliantly matches Redding tear for tear. The lone original song on The Royal Sessions, Rodgers’ “Walk In My Shadow” is an up-tempo wildfire written and sung in the Southern soul style. With fine walking rhythms and R&B-tinged horns, Rodgers recreates the Stax blueprint so convincingly that only the album credits reveal the truth.


I went into The Royal Sessions without a single expectation and found myself pleasantly surprised. Rodgers handles the classic material almost effortlessly, painting the faintest of contemporary sheen on these old-school soul gems. His vocals are wired and inspired and the backing band – wily, talented veterans of countless sessions for Stax, Hi Records, and Malaco – known when, and when not to play behind the singer. The result is a charming, entertaining effort that will make you fall in love with these songs all over again. Kudos all around to Paul Rodgers and his studio crew for their labor of love. (429 Records, released February 4, 2014)