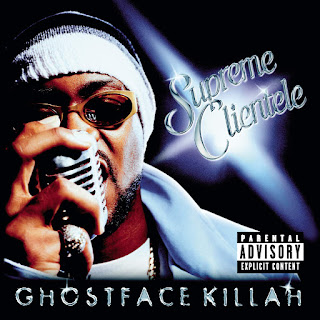 The Wu-Tang Clan revolutionized rap music in a way that trailblazers like Public Enemy, Run-DMC, or NWA can’t match. Using the multiple MC approach of NWA as a blueprint, the Clan mixed gangsta-rap roots with kung-fu chop-sockey mythology and ‘90s-aware style, launching hip-hop into the commercial stratosphere in the process. If anything, Wu-Tang suffered from an overabundance of talent, a wealth that has resulted in Clan solo albums of varying success and substance.

Ghostface Killah’s 1996 debut Iron Man surprised many with its depth and passion and it quickly copped Platinum™ sales status. After working on a number of other album projects, Killah is back with his sophomore effort, Supreme Clientele and, if the rapper doesn’t stray far from the style of his debut here, the good news is that he’s not resting on his laurels, either.

A rock-solid collection of songs, Killah raps solo on a number of cuts, notably the soulful, 1970s-styled “One” and the “In the Rain,” which waxes old school with the addition of former Detroit Wheels guitarist Dennis Coffey, with backing vocals by the Dramatics. An homage to fallen comrades Tupac and Notorious B.I.G. “In the Rain” is a heady brew, indeed. Collaborations on Supreme Clientele include the energetic “Apollo Kids” with Wu-mate Raekwon and “Deck’s Beat” with 60 Second Assassin.

Method Man, Superb, Redman, GZA, and Cappadonna also make cameos here while Killah enlisted the talents of producers like Ju-Ju of the Beatnuts, Inspectah Deck, UMC’s Hassan, and Wu-wizard The RZA to bring his vision to fruition. The result is a hardcore mix of rhyme and rhythm, Supreme Clientele another notch in the Wu-Tang Clan’s collective belts. (Razor Sharp Records, released August 20, 2001)