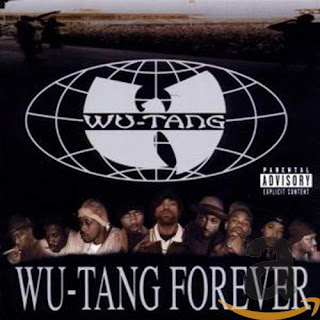 The long-awaited Wu-Tang Clan sophomore effort is a mixed bag of viciously brilliant rhymes, searing hip-hop and insipid pop-culture philosophy. When they’re at the top of their game, Wu-Tang provide rap with a social conscious without peer; at their worst, the most successful collection of rap talent to ever be caught on disc is laughingly inept.

Wu-Tang Forever suffers from its length, with twenty-seven pieces stretched over two discs that could just as easily been distilled into one monster of an album. Instead, the listener is forced to accept the good (“As High As Wu-Tang Get,” “Triumph”) along with the bad (“Little Ghetto Boys,” “Second Coming”) as Wu-Tang Forever indeed seems to sometimes play on forever – and in my book, any group (rap or rock) that resorts to incorporating the insufferable “McArthur Park” in all of its sickening vapidness into a song deserves to meet an ignoble death.

Although still the premiere group working in rap today, the Wu-Tang Clan seems to have stitched this reunion effort together piece-by-piece rather than creating a seamless artistic tapestry like their mega-platinum debut. Also, although I have no problem with bands marketing themselves through clothing and other paraphernalia – “wu-wear” is offered both through the enclosed CD booklet and online through a dedicated web site – to include America Online software as part of Wu-Tang Forever’s “enhanced CD” is really a tad much, offering more of a high-tech come-on to monied middle class rap wanna-bes than to providing a meaningful artistic connection to the African-American portion of their audience. (Loud Records, released June 3, 1997)