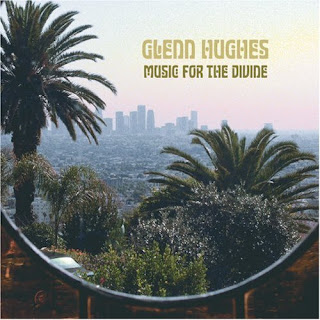 Glenn Hughes is one of those bona-fide rock ‘n’ roll leg¬ends that never seems to receive the credit and accolades that he deserves. His late ‘60s tenure with British rockers Trapeze resulted in three albums, including the band’s groundbreaking 1970 debut, Medusa. That album’s inspired mix of rock, funk, and soul would influence later bands such as Bad Company and Foreigner. His work as vocalist and bass player for Trapeze would move Hughes onto the next level of rock stardom when he replaced Roger Glover in Deep Purple.

Although his tenure with Deep Purple was brief, from 1973 until the band’s break-up in ‘76, Hughes’ presence helped breathe new life into the classic rock dinosaur. Purple’s 1974 album Burn benefited greatly from Hughes’ presence, the bassist providing a funky bottom line to the songs, his soulful vocals offering a fine counterpoint to those of bluesy shouter David Coverdale. This formula reinvigorated the band, Burn rising to number nine on the Billboard album charts. The band followed with the Top Twenty charting album Stormbringer later that year, and closed out this chapter of Deep Purple with Come Taste the Band in ‘75, American axeman Tommy Bolin replacing the departing Ritchie Blackmore for the recording. A live album from this era of the band was issued in 1976, featuring Coverdale, Hughes and Blackmore from a 1975 European performance.

Glenn Hughes’ Music For the Divine

If only for his work with Trapeze and Deep Purple, Glenn Hughes has earned his place in rock history. However, he has also enjoyed an impressive solo career that launched in 1977 and shows no signs of diminishing today, thirty years later. Throughout it all, Hughes’ enormous vocals have pounded out the songs in a series of collaborations with guitarslingers like Pat Thrall, Black Sabbath’s Tony Iommi, Pat Travers and Dave Navarro, among others. Hughes’ 2005 album Soul Mover was a career high among a lifetime scattered with such, but even Hughes has outdone himself with Music For the Divine.

Hughes had hooked up with drummer Chad Smith from the Red Hot Chili Peppers for Soul Mover, and the two found an immediate kinship and chemistry in the way that the best bass players and drummers do. With longtime Hughes’ foil J.J. Marsh on six-string, and keyboardist Ed Roth, the four created a great musical dynamic for the songs on Soul Mover. The guys must have enjoyed the experience, because Hughes, Marsh and Smith reconvened in Smith’s Hollywood Hills home to record Music For the Divine. Released last year in Europe by Italy’s forward-thinking, classically-minded Frontiers Records label, Music For the Divine is just now making its way to these shores.

Sadly, Music For the Divine is the album that the Red Hot Chili Peppers should have delivered in ought-six, all sweat and soul, muscle and grit. The album’s lead-off track, “The Valiant Denial,” is the sort of driving funk-flavored rock that the Chili Peppers once excelled at, Hughes’ voice rising above the mix like a phoenix reborn while the band choogles along behind him. “Steppin’ On” features razor-sharp guitarwork courtesy of Marsh, the axeman tearing off great big greasy chunks of meat while Smith beats out some of his most explosive rhythms in a decade. 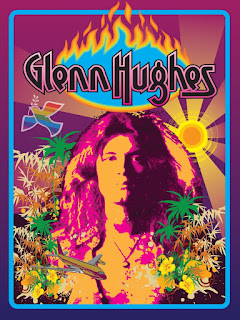 “Monkey Man” is a more conventional cut, of sorts, smoothly gliding from one funky curve to another as Hughes channels Sly Stone’s vocals and the band lays down a solid groove. The song would make a great radio single, with an infectious rhythm, staccato guitar leads and fluid changes in direction that leave the listener breathless. “You Got Soul” revisits 1973 with a loping groove set down by Smith, Hughes reciprocating with his best Curtis Mayfield impersonation, Marsh with a driving, multi-layered and slightly phased chukka-chukka six-string vibe. “Black Light” is another funk-rock rave-up, a high-flying track guaran-damn-teed to get yer feet a tappin’ and your ass moving. Marsh’s guitar solo rips from one speaker to another, his nimble fingers tickling the frets with a reckless abandon.

Hughes is a much better songwriter than a lot of critics have given him credit for, and it shows on Music For the Divine. His lyrics are short and punchy, yet imaginative and weighty with distinctive imagery. Musically, as described by the songs above, Hughes and crew jump deep into the murky depths of funkytown, rockin’ the house like the roof’s on fire. It comes as some surprise, then, that the band decided to tackle the Moody Blues’ classic “Nights In White Satin” as the album’s lone cover. I suspect that Hughes has been carrying the torch for this one for some time now, his vocals a powerful maelstrom of emotion and emoting while the band mostly plays it straight behind him. Chili Pepper guitarist John Frusciante drops by to contribute a wicked guitar line behind Hughes’ vocals, the result adding a haunting element to the song’s already elegant veneer.

You can’t spell “funky” without the word “fun,” and that’s what Music For the Divine sounds like. These guys obviously had a hell of a time recording these songs, and it shows. No label pressures, no commercial expectations, just a bunch of talented musicians getting together and jamming without a care. This looseness shows in the inspired performances of these grooves, making Music For the Divine as much fun to listen to as it probably was to make. Play it LOUD! (Frontiers Records, 2006)