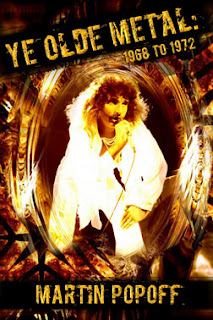 Writing about music is such a subjective thing that it often takes the perspective provided by at least a minimum of a dozen years to put a recording in its proper place. Given the ever-changing moods of the cultural zeitgeist, as well as the individual personal tastes of each reader, it’s a wonder that rock critics, the term itself an albatross of sorts – “music journalist” seems to be the preferred title these days, as if writing about music necessitated any real journalistic training – ahem, it’s a wonder that rock critics can agree on anything for much longer than lunch. Even the Reverend has listened to records that he raved about during, say, back in the ‘90s, and found them to be a shrill and bitter-tasting pill here in the new millennium.
Of course, a sort of consensus is eventually forged over much discussion, spilled blood-and-beer, and more tears than sweat, really, and thereby the coveted status of “Classic Album” is chiseled into stone for all time...or at least until some young jackass know-it-all comes around and states that so-and-so was really much better back in the day and takes a jackhammer to the whole mess. The safe bet, kiddies, is to steer clear of these rockcrit reindeer games and just listen to what you like...you know, like Dylan said, “don’t follow leaders, watch the parking meters,” or something equally obtuse. Really, the lifespan of the “Classic Album” in the media-overdrive Internet age seems to spin faster than the revolving door at a celebrity rehab center, so why try pinning the critter to the mat?

Rock critic – and I use the term as an honorific rather than an insult – Martin Popoff has been around long enough to have seen and heard as much or more than the Reverend, and yet still remains in the trenches, knocking out CD reviews and even books with an alarming regularity. Well-known among heavy metal and hard rock circles, Popoff is the editor of respected metal mag Brave Words & Bloody Knuckles. Popoff is one of the undisputed masters of writing on the genre, and his interests and knowledge both range wide and far. His three book series, The Collector’s Guide To Heavy Metal, are essential reading for the fan; taken together they are an encyclopedic resource that covers thousands of album releases with ratings and critiques and no little insight.

Popoff knows his stuff, and he knows his audience, which is why his latest book project – a series titled Ye Olde Metal – is available only from the author as a private stock, limited-edition of 1,000 signed and numbered copies only. Each volume in the series will cover a specific time period, and through artist interviews, will tell the story of a number of classic metal albums. In a nifty little bit of graphic design, the books will share cover and spine graphics, the entire set representing a veritable encyclopedia of hard rock and metal albums. Popoff knows that the market for these tomes is limited to hardcore fanboys such as the Reverend, thus the limited and collectible nature of each book.

Grandfathers and Godfathers of Heavy Metal

Popoff recently made the first volume, Ye Olde Metal: 1968 To 1972, available through his web site and yours truly wasted no time grabbing up a copy. It’s well worth the money, for both the dedicated follower of fashion as well as the rabid collector. This first book covers the grandfathers and godfathers of hard rock and heavy metal, the obscure-yet-essential and highly influential bands that laid the foundation for decades of musicians to build upon. Among the bands covered in this first book are Blue Cheer, the MC5, Sir Lord Baltimore, Bloodrock, Warpig, Cactus, Mountain, Uriah Heep, Nitzinger, Dust, Humble Pie, Buffalo, Captain Beyond, and Trapeze. Each chapter of the book provides an in-depth overview of one important album from each band, the story told through interviews with the folks that made the music. Upon first glance, what impressed me the most about Ye Olde Metal: 1968 To 1972 is the line-up of bands and albums chosen by Popoff, which reads like a soundtrack to my high school years.

Living in a rural suburb of Nashville during the latter-half of the period covered by the book, the Reverend’s musical tastes were usually out-of-step with those of my more mainstream-oriented classmates, and heavily informed by Creem magazine and writers like Dave Marsh, Lester Bangs and, later, Rick Johnson. The proto-metal, riff-happy sounds of bands like Uriah Heep, Cactus, Mountain, and Dust made themselves at home on my cheap turntable, and of the fourteen bands/albums covered by Popoff, in 1972 I owned ten of them (and I own them all now after reading the book).

Popoff’s conversations with musicians like Mountain’s Leslie West and Corky Laing, the MC5’s Wayne Kramer, Jim McCarty and Carmine Appice of Cactus, or John Nitzinger of, well, Nitzinger are informative in spite of years of familiarity with the artists and their work, each chapter revealing new aspects of the album discussed. For bands like Bloodrock, Sir Lord Baltimore, or Dust that were listened to regularly, but for which little or no information existed in print at the time (long before the invention of the ‘net), the book often delivers lots of minor revelations. As for those artists that I didn’t even know existed until recently, like Warpig or Buffalo, the book provides a fitting introduction to their music (and prompted this reader to dig up copies of their albums).

Throughout Ye Olde Metal: 1968 To 1972, Popoff’s writing is clear, knowledgeable and friendly, providing great insight into the importance of these artists and their work. It also takes a back seat to the artist’s own accounts, Popoff allowing these long-neglected titans of rock their say, documenting the story of each album in the musician’s own words. Even at 232 pages, the book is a quick read and as entertaining as it is informative. If you’re a fan of any of the aforementioned bands, curious about their work and legacy, or just a curious reader with a taste for hard rock cheap thrills, I’d heartily recommend that you check out Ye Old Metal: 1968 To 1972, this humble critic anointing the book with my highest honor…the Rev sez “check it out!” (Power Chord Press)