The Blues Images 2021 Calendar Is Here! 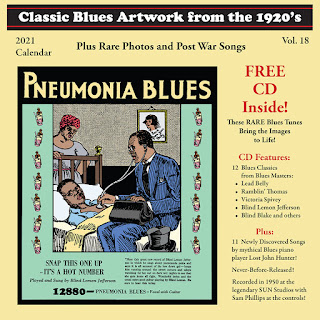 Old-school blues fans should already be familiar with John Tefteller’s annual Blues Images calendar. I’ve hung one of these invaluable date-keepers on the wall of my office for better than a decade and I always look forward to receiving the next year’s calendar each fall. For the newcomers among you, the Blues Images calendar features vintage advertising artwork from long-gone blues label Paramount Records that noted record collector and dealer Tefteller rescued from a dumpster over 20 years ago. Each year’s calendar preserves an immensely-valuable visual history of the early years of the blues.

The 2021 calendar is light on the sort of imaginative pen-and-ink artwork that graced previous year’s collections, probably a result of improved printing and reproduction technology in the late 1920s and early ‘30s, which allowed for more expansive use of photos. You still get these unique artistic takes in ads for songs like Blind Lemon Jefferson’s “Pneumonia Blues” and Ramblin’ Thomas’s “Hard To Rule Women Blues,” and there are smaller photos of B&W advertising artwork reproduced in the empty squares on the grids for several months.

Since the calendar features more visual advertising for new records, blues fans get rare, not-seen-for-decades photos of both well-known artists like John Lee “Sonny Boy” Williamson, Blind Boy Fuller, and Lead Belly as well as lesser-known bluesmen-and-women like Victoria Spivey, Buddy Moss, and Walter Roland. Each calendar page is also annotated with historical and biographical information about the featured artist, and each month also includes the birth and death dates of classic blues artists.

The Blues Images 2021 calendar cost slightly more than some cheap wall-hanger you’d buy from the mall or local bookstore, but for the hardcore blues fan, Tefteller packs a lot of value for the $26.95 (plus shipping) it will cost you. Each Blues Images calendar includes a full-length CD that features rare, impossible-to-find, and often one-of-a-kind tracks, many of them sourced from Tefteller’s extensive personal collection (which must truly be awesome).

This year’s CD features some mighty rare but entertaining cuts among its 23 tracks. “Peg Leg” Howell’s “Too Tight Blues” is a steamy slab o’ Piedmont-styled country blues from 1927 while blues woman Bertha Henderson sings a sordid tale of “Terrible Murder Blues” with guitar accompaniment from the legendary Blind Blake (circa 1928). I’m sensing a theme here as Walter Roland tells of “Cold Blooded Murder,” offering subtle piano blues from 1935 while the elegant fretwork of Buddy Moss graces a 1935 recording of “Undertaker Blues” (and he’s accompanied on second guitar by folk-blues legend Josh White!). 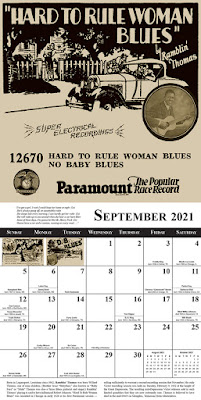 Whereas Tefteller plumbed the depths of the first decade of the blues (1920s) with previous calendars, now we’re inching into the 1930s with stellar performances. The previously-mentioned songs are joined by the familiar “Good Morning, School Girl” from the original “Sonny Boy” Williamson, recorded in 1937 with Robert Nighthawk and Joe Williams joining the harmonica wizard. The great Huddie Ledbetter (a/k/a Leadbelly) is represented by the haunting “New Black Snake Moan,” which takes full advantage of the singer’s ethereal vocals, and Texas blues legend Blind Lemon Jefferson showcases his six-string dexterity and high-lonesome vocals with a 1929 recording of “Pneumonia Blues.”

Tefteller jumps forward a couple of decades to 1950 with eleven red-hot, eyebrow-scorching performances by obscure blues pianist Lost John Hunter. These recently-discovered sides were originally recorded at the Memphis Recording Service (a/k/a Sun Studios) in Memphis, Tennessee and provide a first look at the piano-pounder’s talents on tracks like the sultry “Miss Thelma Mae,” the jaunty “Mind Your Own Business,” and the raucous “Lost John’s Pinetop Boogie,” a rollicking number that probably had ‘em hanging from the rafters in juke-joints on either side of the mighty Mississippi. Tefteller includes alternate takes among these eleven tracks, but there’s not a bad performance to be found.

The performances on the CD, which include the songs from the original advertising featured on the calendar pages as well as related releases, have been remastered from the original 78rpm records using a digital process that was originally developed for the American Epic PBS series. Using original, 1920s-era sound equipment and pairing it with cutting edge modern technology, the “American Epic” process digitizes these rare sides, preserving them for posterity and making the sound on these antique shellac flapjacks really jump out of your speakers.

The annual Blues Images calendar and CD is a “must have” addition to the collection of any serious fan of early blues music. Blues Images sells other cool blues-related stuff, too, like posters, t-shirts, CDs from previous years, and past years’ calendars. You can find it all on the Blues Images website. Tell John that “the Rev sent ya!”
Posted by Rev. Keith A. Gordon at Friday, November 06, 2020