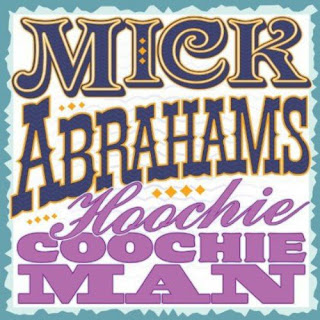 Our friends at Secret Records in the UK have dug up this recently-discovered and previously-unreleased collection of songs by British blues-rock guitar legend and former Blodwyn Pig frontman Mick Abrahams. Hoochie Coochie Man offers up 15 tracks that were originally recorded circa 2003/2004 and were seemingly lost until now, the album joining the label’s growing catalog of rare and obscure Abrahams discs.

Featuring ten Abrahams’ originals written or co-written by the guitarist, along with a handful of well-chosen blues covers, Hoochie Coochie Man represents Abrahams in fine form. From jump street, I have a major bone to pick with the album’s lack of musician credits...Abrahams is clearly singing with other artists on several tracks, there’s some fine harp work peppering a few songs, and there is some solid musicianship, but you couldn’t tell it from the sparse info provided. Next time around, let’s not keep this stuff secret, OK?

That said, Hoochie Coochie Man is an entertaining collection, rife with the kind of blistering fretwork that you monster fans of blues-rock guitar eat up, the party starting with the lively title track. Abrahams nails the Willie Dixon blues standard (by way of Muddy Waters) with a rollicking arrangement, scorching guitar, and somebody’s flailing harp raging away in the background. The instrumental “Sunday Drivin’” is the kind of six-string romp that Jeff Beck used to crank out circa 1968 or so, while Abrahams’ original “Roadroller” is a swinging jump blues-styled rocker with plenty of jazzy guitar pickin’.

A cover of the Sonny Terry and Brownie McGhee gem “Cornbread and Peas” is delivered with hearty vocal harmonies, jolts of scrappy harp, and subdued but elegant guitar and the slinky “I Ain’t Never” displays a different facet of Abrahams’ talents, greasy guitar licks and a languid tempo approximating the Piedmont blues style quite nicely. Overall, Hoochie Coochie Man is a lot of fun, Abrahams not re-inventing the blues but offering enough of his own flavor to spice up the musical gumbo; docked half a grade for the lack of musician info. Grade: B (Secret Records, released November 5, 2013)