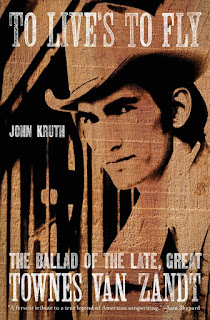 There are two things that everybody seemingly agrees on in the pages of To Live's To Fly, John Kruth's excellent biography of Townes Van Zandt: first, TVZ was one of the greatest songwriters that country music has every known; and second, TVZ was one messed up dude.

For those unfamiliar with the man that many consider country music's poet laureate, Townes Van Zandt was born to a wealthy Fort Worth, Texas family whose roots reach back to the city's founding. Like most musicians of his generation, a 12-year-old Townes was mesmerized by Elvis Presley's 1956 appearance on The Ed Sullivan Show. Afterwards, Kruth writes that "overnight, Van Zandt became completely obsessed with rock and roll." Having grown up on the country sounds of Lefty Frizzell and Hank Williams, Van Zandt's new favorites were Ricky Nelson, Jerry Lee Lewis and the Everly Brothers. It was his father, however, who suggested that he begin writing his own songs, pointing the young Van Zandt towards his eventual destiny.


Van Zandt went to college, but he really wasn't one to attend classes, instead preferring to lock himself in his room, drink, listen to records, and play the guitar. The education he received wasn't what his parents believed it would be. Concerned about his drinking and wild ways, his parents had TVZ committed to a mental hospital in Galveston, Texas where he was diagnosed as "manic depressive" and received three months of electric-and-insulin-shock therapy. The impact this treatment had on Van Zandt is arguable, but it most likely contributed to his ongoing adult depression, alcoholism and mental instability.

He married, went back to college for a while, finally dropping out in 1964, ending up in Houston doing the only thing he had ever really wanted to do: sing and write songs. Van Zandt fell in with a like-minded crowd of singer/songwriters that included life-long friend Guy Clark, Mickey Newbury, and Jerry Jeff Walker. It was here that Van Zandt honed his performance skills and began displaying the songwriting skills that have made him a legend.

Over the next 30 years, Van Zandt would go on to record some two-dozen albums for a number of independent labels and write scores of songs, some like "Pancho & Lefty" or "If I Needed You" becoming significant hits for other artists. He moved to Nashville in 1976, but headed back to Texas in '78 and didn't record again for almost a decade. He landed back in the "Music City" just when his songwriting fortunes began to rise, and it was in Nashville that he died on New Year's Day, 1997.

The mystery of Van Zandt's appeal is easy to solve. A charismatic personality and performer, Van Zandt possessed a great charm and intelligence. By any standards, Van Zandt wasn't really a country artist...influenced greatly by bluesman Lightnin' Hopkins, his music is more a mix of twangy folk and country blues. His skill with the language, however, is pure poetry, his lyrics expressing intricate thoughts and emotions but flowing casually. His influence on songwriters crosses all musical genres, however, and it comes as no surprise that artists as disparate as Willie Nelson, Emmylou Harris, Mudhoney, and the Cowboy Junkies, among others, have recorded his songs.

To Live's To Fly" offers an in-depth and, at times, depressingly exhaustive overview of Van Zandt's life, from childhood through his death. Kruth interviewed hundreds of Van Zandt's friends, family and fellow artists and paints a detailed portrait of both the man and the demons that plagued him for most of his life. Most of all, Kruth provides an understanding of the man through both his actions and his songs. (Da Capo Press, published March 5th, 2007)

Buy the book from Amazon: John Kruth's To Live's to Fly: The Ballad of the Late, Great Townes Van Zandt