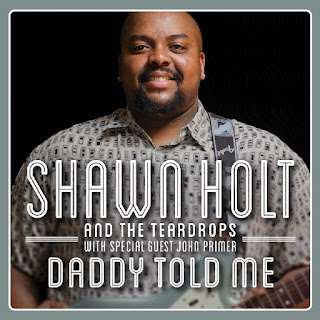 With his legendary father, Magic Slim, sadly passing away in February 2013, it was up to singer, songwriter, and guitarist Shawn Holt to pick up the torch and begin to make his own mark on the blues world. To call Daddy Told Me a debut album would be a bit too disingenuous – Holt toured with his father and the band for years, and his scrappy guitarwork can be heard on albums like Magic Slim’s Black Tornado – but it is a transitional recording nonetheless.

Teaming with longtime Teardrops Chris Biedron on bass and drummer Brian “B.J.” Jones, Holt enlisted guitarist Levi William and family friend and Chicago blues guitar legend John Primer to put together Daddy Told Me. The results speak loudly for themselves, the album a wonderful collection of inspired versions of songs written or popularized by Magic Slim alongside Holt’s own well-written originals.

The title track draws upon Chicago blues tradition while still sounding contemporary, the band cranking out a deep, driving groove atop which Holt layers on his gruff, growling vocals on a tale of romantic turmoil as the guitars grind and howl. Holt’s “Hold You Again” follows a similar template, matching muscular guitar-driven blues with an unrelenting rhythm. By contrast, Magic Slim’s “Buddy Buddy Friend” displays a playful side to the band, with spry vocals and less bruising, more intricate fretwork.

A cover of Bo Diddley’s “Before You Accuse Me” is an old-school delight, with John Primer’s swinging vocals and stinging guitar an undeniable pleasure while Holt’s “You Done Me Wrong” offers the perfect match of traditional and contemporary Chicago blues, whipsmart guitar and jaunty rhythms dragging the form into the 21st century. Bottom line: if you were a Magic Slim fan, you’re going to love Daddy Told Me! Grade: B+ (Blind Pig Records, released September 24th, 2013)

Buy the CD from Amazon: Shawn Holt & the Teardrops’ Daddy Told Me