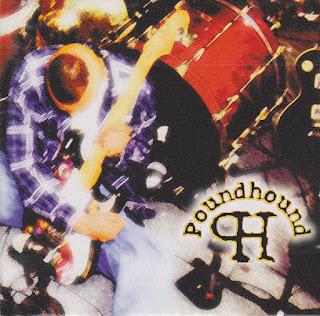 King’s X bassist Doug Pinnick steps out on his own with this self-produced solo effort under the “Poundhound” moniker. Pinnick’s musical influences are quite evident: Hendrix, George Clinton, Prince and, actually, King’s X, to name a few. Although Poundhound never really strays far from the style of music created by Pinnick’s full-time job, i.e. thundering rhythms, unexpected syncopation, nifty chord changes, and tasty six-string work, Pinnick nonetheless has forged a set of songs with a distinct identity of their own. I can’t see any King’s X fans being alienated by Massive Grooves, which reinforces King’s X’s credibility rather than diminishing it.

With Massive Grooves From the Electric Church of Psychofunkadelic Grungelism Rock Music (the album’s full and glorious title), Pinnick and his Poundhound mates explore the funkier sides of King’s X music (of which Pinnick is an integral part), creating, well, some “massive grooves.” The disc opens with a funky-cool space-jammin’ psychedelic rant reminiscent of Hendrix on Axis: Bold As Love. From there, the single word-titled songs explore a pleasant musical mix of P-Funkish grooves, metallic riffs and improvisational instrumentation. Although there’s not a bum track here, some songs work better than others do. Those that strike true – like the monstrous “Darker,” the effervescent spiritual booty-shaker “Jangle” or the ethereal “PsychoLove” – are fine songs, indeed.

Pinnick is a rare talent, a group player that contributes to making King’s X one of the most underrated outfits in rock ‘n’ roll today. As shown by Massive Grooves, he is also a visionary solo artist willing to explore the possibilities of the music and is quite a talented guitarist in his own right. Although he has made a career with his band, Pinnick’s Poundhound project shows that, for this artist, there’s also life alongside King’s X. (Metal Blade Records, released 1998)