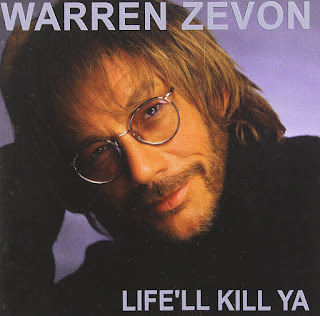 Warren Zevon’s first studio effort in years finds him back in rare form. In recent interviews with the critically-acclaimed artist, Zevon has expressed a personal satori of sorts, the observation that rock ‘n’ roll seems to be made by a bunch of angry young men who really have few reasons for such venomous outpourings of angst and frustration. Middle age, claims Zevon, is where the real funk settles in, when body parts start to give out (illustrated perfectly on Life’ll Kill Ya by Zevon’s hilarious “My Shit’s Fucked Up”) and your own mortality becomes crystal clear. This is the theme that runs throughout Life’ll Kill Ya, and as an aging scribe a mere whistle stop away from full-blown middle age status, I can readily identify with Zevon’s message.

This is no youthful collection of songs, but rather the slightly cynical, mature and pragmatic observations of a talented artist who has trodden a few long and dark roads. Whether he’s delving into the bittersweet nature of love, as with “For My Next Trick I’ll Need A Volunteer,” or sharing the realization, on the title track, that none of us get out of this world alive, Zevon’s songs are poetic puzzles, their meanings often revealed piece by piece. His ode to Elvis, the darkly amusing “Porcelain Monkey,” is the best song written about the great American icon and the fleeting nature of fame while a cover of Steve Winwood’s treacly “Back In the High Life Again” revives the song with a slow, soulful rendering. Accompanied by sparse instrumentation that walks a fine line between rock and folk, the songs on Life’ll Kill Ya represent Zevon’s best performances in a decade. It’s an inspiring collection, a resounding roar from an old lion that isn’t ready to give up his place at the table among the young cubs quite yet. (Artemis Records, released January 25, 2000)

Buy the CD from Amazon.com: Warren Zevon’s Life’ll Kill Ya
Posted by Rev. Keith A. Gordon at Friday, August 06, 2021