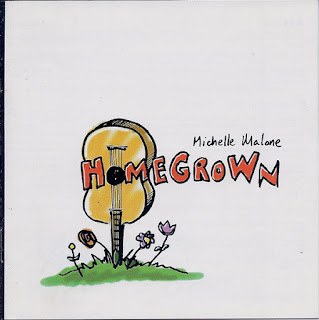 Atlanta’s Michelle Malone is proof that you can’t keep a real artist down. After an ill-promoted, though energetically rocking Lenny Kaye-produced major label debut in 1990, Malone has spent the rest of the decade wandering from one indie imprint to another. During this time, while fellow female folk rockers like Jewel, Meredith Brooks, or Sheryl Crow have experienced varying degrees of career success, Malone has remained an undiscovered gem.

Homegrown, Malone’s follow-up to 1997’s wonderful Beneath the Devil Moon, is unlikely to play beyond Malone’s faithful cult following, regardless of how good it is. No longer a diamond in the rough, years of playing and recording have polished Malone’s former barroom growl into a multi-faceted and quite enchanting singing voice. Malone can still rock out – witness the pop hooks on the album-opening “Avalon” or the riff-driven “Brand New Dream.” Malone has developed range and depth as a singer, though, illustrated by the country-sweet “Keeping Score” or the folkish tale “Cheap One Star Hotel.”

As a songwriter, Malone has always been at her best with semi-autobiographical confessional lyrics, the kind of bread and butter that provides Tori Amos or Alannis Morrisette with multi-Platinum™ sales. Unlike these chart-topping “angry young women,” however, Malone’s material resounds with sincerity and realism. Her anger has been tempered somewhat by humility, a point best shown by Homegrown’s bittersweet title track. Looking back over the last decade, running in place while the rest of the world runs by, Malone laments “I’ve been sitting in this apartment waiting for my ship to sail/but the canvas started rotting through and there’s rust upon the sail.” Springsteen once asked listeners “is a dream a lie if it don’t come true, or is it something worse?” Malone sings “this is my home – where my dreams began to fade.” The physical place of “home” becomes a metaphor for an entire career. Nevertheless, the song shows a glimmer of hope, Malone accepting the way things are with a realization that she’ll carry on in spite of the cost.

Whether Malone would like another shot at the brass ring with a major label or would be content with a long-term home on a stable indie is beyond my knowledge. I do know that I’ve been listening to Malone since her major label debut almost a decade ago, and I’ve seen her continue to mature as an artist. Unlike many more successful folks, I’ve never heard a bad Michelle Malone album. It’s a strange coincidence, but Malone’s career parallels that of Kiya Heartwood. Both were signed by Arista at roughly the same time – Malone with her Drag the River band and Heartwood with Stealin’ Horses. Both released impressive, critically acclaimed debut albums, both are Southern storytellers and Arista had no idea what to do with either of them.

While Heartwood has recorded sporadically since, most recently in a duo called Wishing Chair, Malone continues to crank out fine music for whatever label happens to like her at the moment. Michelle Malone is a true treasure, though, and living proof that sales aren’t the only measure of an artist. You owe it to yourself to discover her talents – I promise that the day will come when Malone will be recognized as the artist that she is. (Strange Bird Songs, released November 11, 1999)