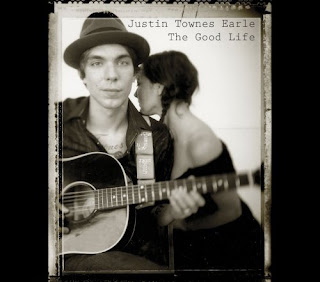 When you’re the son of a bona fide Americana music legend, and named after one of greatest songwriters of the genre (Townes Van Zandt), expectations are high. With his full-length debut, The Good Life, Justin Townes Earle delivers everything expected of him in spades. Not content to merely mimic his dad’s work, the younger Earle takes his impressive songwriting skills in a number of diverse directions. Whereas his pappy’s music tends to draw more from both rock and folk worlds, the younger Earle instead goes in the other direction, pulling the best from the Tennessee and Texas hillbilly traditions.

Growing up in a musical household, Earle had the opportunity to soak in all sorts of influences, and it shows in his work. An eerily-mature songwriter that is skilled beyond his years, Earle easily weaves together story-songs in his dad’s image, but with his own voice and a widely differing soundtrack. The title track from The Good Life is a delicious ‘60s-styled country throwback that sounds like a classic Faron Young tune, while the heartbreaking “Who Am I To Say” is reminiscent of namesake Van Zandt’s stark folk poetry.

Other songs on The Good Life showcase Earle’s mastery of a diverse range of country styles. “Lone Pine Hill” is a haunting Western dirge and “What Do You Do When You’re Lonesome” is a weepy Texas dancehall ballad. “South Georgia Sugar Babe” is a bluesy, Southern rock/R&B hybrid with gumbo-funk rhythms while “Lonesome And You,” with its mournful steel guitar and slow shuffle, is the sort of honky-tonk country that Ernest Tubb could crank out in his sleep. “Turn Out My Lights” is a delicate, finely-crafted folk ballad…and about as close as Justin gets to sounding like his famous father.

The vocals on The Good Life are warm, certain and soulful throughout, and producer R.S. “Bobby” Field’s deft hand and extensive roots-music knowledge allowed him to bring out the best in Earle, perfectly capturing the artist’s eclectic sound. With boundless ambition and loads of talent, Earle easily ties together strains of roots-rock, folk-blues, Tex-Mex, Western Swing, and traditional country in the creation of an amazing, remarkable debut album. (Bloodshot Records, released February 1, 2008)

Review originally published by the Trademark of Quality (TMQ) blog...