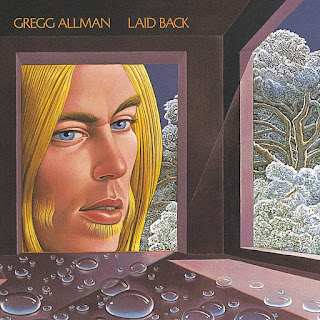 The tragic death of his brother Duane in October 1971 had a profound effect on Gregg Allman, who would develop an often-times debilitating substance abuse problem in its wake. Although the Allman Brothers Band continued truckin’ after the loss of its founder, releasing the critically-acclaimed 1972 double-album Eat A Peach – which also included Duane’s last recordings – the album’s commercial success (peaking at #4 on the Billboard album chart and achieving Platinum™ sales levels) ensured that the ABB would attempt another bite of the apple. Frictions grew within the band, with singer, songwriter, and guitarist Dickie Betts often butting heads with band namesake Gregg over the band’s creative direction.

Gregg began thinking about exploring a solo career and, in late ’72, he began work on Laid Back, with friend and former bandmate Johnny Sandlin co-producing the album. Desiring to explore musical avenues apart from the ABB, Allman had Sandlin enlist a talented crop of musicians, including old friends like guitarists Scott Boyer and Tommy Talton (from the Southern rock band Cowboy) and keyboardists Chuck Leavell (a future ABB member) and Paul Hornsby as well as bandmates Jaimoe and Butch Trucks. The album’s eight songs featured four written by Allman, one Boyer composition, and a couple of choice cover songs that explored the possibilities of rock, blues, jazz, gospel, and R&B music (i.e. Americana).

The resulting mix of sounds on Laid Back found an audience not only among ABB fans but also with newcomers who appreciated Allman’s soulful vocals and the album’s “laid back” blend of instrumentation and melodic musical styles. The hit single was Allman’s “Midnight Rider,” probably as close to the ABB sound as the singer would get here, an eerie swamp-rock soundtrack resonating behind Allman’s haunted vocals. There are other solid moments here, though – the smoky late-night blues vibe of “Queen of Hearts,” which offers jazzy undercurrents; an inspired, up-tempo cover of the 1964 R&B hit “Don’t Mess Up A Good Thing”; and the gospel fervor of the traditional “Will the Circle Be Unbroken” – all of which drove the album to #13 on the charts, selling better than half a million copies. It also launched Allman’s solo career, separating him from his longtime band and ensuring a musical legacy of his own. (Capricorn Records, 1973)

Buy the CD from Amazon: Gregg Allman’s Laid Back
Posted by Rev. Keith A. Gordon at Friday, July 23, 2021