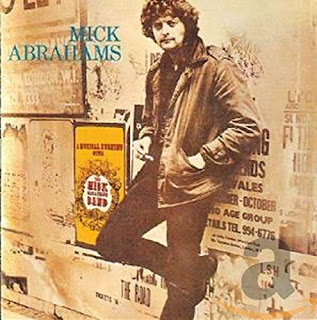 Mick Abrahams was Jethro Tull’s original axeman, splitting after Tull’s 1968 debut LP This Was over arguments with bandleader Ian Anderson concerning the band’s musical direction. Abrahams would go on to form Blodwyn Pig, a British blues-rock band with a heavy jazz undercurrent not unlike what John Mayall was pursuing at the time, releasing two albums with that band before hitting the solo circuit.
A Musical Evening with Mick Abrahams (often shortened to just Mick Abrahams) was the guitarist’s solo debut, a mixed effort that showcases his six-string skills while also revealing the gaps in his songwriting abilities. The album-opening “Greyhound Bus” offers an infectiously-funky rhythm with scraps of Abrahams’ guitar shining through the dense mix alongside Bob Sargeant’s keyboard riffs, while “Awake” presages prog-rock with its dark ambience, subdued vocals, and instrumental prowess. The fleet-of-foot “Big Queen” is similarly priggish, but with blues threads woven throughout similar to what Mountain, Bloodrock, and even Beck, Bogart & Appice would be doing a year or two hence.

However, the album goes off the tracks with the curious, weak-kneed “Winds of Change,” which is too soft-edged for blues-rock, its psychedelic pretensions a few years past the “sell by” date. Abrahams’ “Seasons” partially redeems the album’s excesses; a more straight-forward rocker with blues and prog tendencies, there is plenty of ominous keyboards, razor-sharp fretwork, and exotic instrumentation beneath the gang vocals to fill the song’s lengthy 15-minute run time. While not the most auspicious of debut albums, A Musical Evening with Mick Abrahams offers a glimpse of the guitarist’s immense talents. Abrahams would take keyboard wizard Bob Sargeant and big-beat drummer Richie Dharma with him to the Mick Abrahams Band for a single LP the following year. (Chrysalis Records, 1971)