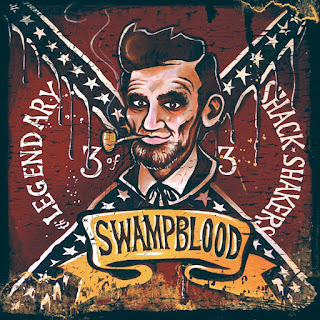 It’s been said by some that if drive down Highway 100, south outta Nashville and through the sleepy little burg of Fairview, you’ll find an old dirt road at the Hickman County line. You follow this road back through the woods ‘til you find the gnarled tree where the strange chickens roost all day and night. From there, you take the gravel trail on the right, go down the hollow past Lady Sniff’s shack (pay no attention to the sirens’ wail that you’ll hear coming from behind those walls) to arrive at the crossroads. Pick the right fork, and it’ll take you down through the knotty kudzu gateway to the edge of the ole swamp…

Now, you have to be careful when going down there, ‘cause much like Rudderville or Kingfield, folks ‘round these parts get a might touchy if they don’t know you. If you’re drivin’ too nice or too new of a car, the ‘shiners might toss a few rounds your way thinkin’ that you’re a Revenue agent or some other sort of Federale. Tales say that the swamp is haunted by the ghosts of several Delta bluesmen that gave up thriving careers and settled down right here, working as farmhands in the nearby tobacco fields. On Saturday nights, they’d get together with cigar-box guitars and harmonicas and they’d sing. Somebody would drag some sort of scaly critter out of the swamp and cook it up for dinner, washing down the dubious feast with some clear, vicious, foul-tasting liquor.

If you have a mind to venture out into that neck o’ the woods, I’d suggest that you first make sure that you’re driving the right kind of car…nothing too flash or too Hollywood, and certainly nothing made by the flan-factories of Detroit after 1980. Maybe some sort of early-70s Mopar, like a Charger or Satellite, preferably one with a few well-earned rust holes, missing chrome and a dirty old sock stuffed in the gas nozzle. Nobody down around the swamp will look at you twice, especially if you’re rattlin’ Swampblood, the latest-and-greatest from th’ Legendary Shack*Shakers, out of your vintage quad sound-system. With the Col. J.D. Wilkes as your co-pilot across these perilous killing fields, you’re assured of getting back home alive and kickin’.

Feedback-whipped howls and nancy banjo-pickin’ comprise the brief instrumental “Dawn,” sounding right at home surrounded by hanging vines and cypress trees. It’s the perfect-fit intro to “Old Spur Line,” Swampblood’s kick-off tune and as nasty a slice o’ greasy redneck funk as you’re likely to hear these days. The Colonel’s vocals are slightly echoed in the mix as he spits out this cautionary tale of traveling into places that you shouldn’t oughta. The band shuffles along, a minor thunderstorm behind Wilkes’ haunting vocals. “Hellwater” begins with an authentic Tony Joe White guitar lick, David Lee channeling the spirit of John Campbell as he picks out a familiar poke-salad riff and Wilkes belts out a song about the wages of sin.

Properly warmed up by this time, the Colonel and his instrumental army take Swampblood up a notch; “Easter Flesh” sounds vaguely Middle Eastern in flavor, with circular riffs and martial rhythms, Wilkes’ up-tempo vocals bringing some sort of nasty Biblical judgment to the poor unfortunate souls who resist salvation. The title cut takes us further into the murky water than we’ve ever been before, the song a raucous, compelling number with manic harp work and fire-and-brimstone lyrics sung in a possessed voice. Lee’s trebly fretwork fuels the song’s instrumentation, a rhythmic assault that is as dense as the morning fog on the bayou.

From this point, Swampblood descends further into alcohol-fueled madness, each performance proudly wearing the sweat and fervor of a backwoods preacher as the Colonel puts his boys through their paces. “Cheat the Hangman” is like a runaway freighter jumping the tracks and diving headfirst into a muddy river while “Born Again Again” is an old-timey spiritual with a jug-band soul and a church-pew heart. “The Deadenin’” proves that it’s not nice to fool with Mother Nature, the song an environmental anthem that has Wilkes’ howlin’ at the moon while the band kicks out a wily, smoke-tinted and disturbing soundtrack behind the Colonel’s gnashin’-and-wailin’ vocals.

There are several more gems hidden in Swampblood’s grooves that will tickle your imagination, like “Jimblyleg Man,” an Appalachian hillbilly hoedown with spry fiddle playin’ and plenty o’ words about some sort of wicked sprite, an imaginary evil like the chupacabra down in south Texas or West Virginia’s mothman. “He Ain’t Right” is a rockabilly rave-up that reminds one of Hasil Adkins. “Angel Lust” has a jazzbo sound that kicks your ears like Professor Longhair jammin’ with Cab Calloway while Brett Whitacre’s tribal drumbeats and tasteful fills play along nicely with Mark Robertson’s muscular upright bass as Wilkes’ swinging vocals take up any remaining slack. Whitacre adds the accompanying patterns behind the Colonel’s mighty potent stream-of-consciousness rant “Preachin’ At Traffic.” Swampblood finishes much like it started, with the somber crosspatch “When I Die” leading into the fading hill country banjo-maul that is “Bright Sunny South.”

Swampblood is th’ Legendary Shack*Shakers’ fifth studio album, and if the band never evolves into world-beaters, they’ll always deliver exactly what you’d expect them to: a combustible blend of roots-rock, honky-tonk country, electric blues and retro-rockabilly. Yeah, they may be a throwback to a simpler, highly-rocking time, and hopelessly out-of-step with today’s musical trends. But as the Colonel says, “I dream in sepia, mono and Beta” – as defiant a statement of Luddite fist-shaking as has been committed to tape. I wouldn’t expect th’ Legendary Shack*Shakers to headline the Pitchfork Festival, but if I ran into them at a cockfight, I’d buy ‘em a mason jar of whatever they wanted to drink… (Yep Roc Records, released July 16th, 2007)