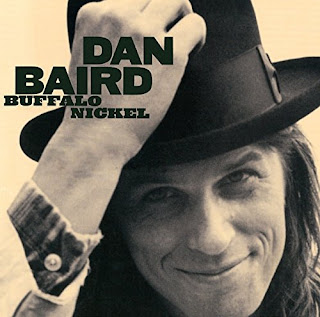 As the frontman for the Georgia Satellites, Dan Baird experienced his small share of success. The band’s three collections of 1970s-styled, stripped-down, primal rock ‘n’ roll yielded a handful of minor hits and an unqualified classic in “Keep Your Hands To Yourself.” It was Baird’s first solo disc, however, 1992’s impressive Love Songs For the Hearing Impaired, on which his songwriting talents truly blossomed, his skills as a guitarist also showcased by a fine collection of tunes.

Almost four years have passed since that initial effort, during which time Baird played on and produced a fine album by Nashville’s Ken McMahan and toured with fellow Southern rocker Terry Anderson and former Del Lord Eric Ambel in a loose-knit but highly-rocking entourage called the Yahoos. Somewhere in between, Baird found time to pen the songs that make up Buffalo Nickel, a near-classic of Southern rock that bridges the gap between where country music has been and where rock music is going.


With help from producer Brendan O’Brien (who also contributes a fair amount of instrumental talent, as well), Nashville bassist extraordinnaire Keith Christopher, and former Satellites bandmate Mauro Megellan on drums, Baird’s Buffalo Nickel is a hot, sticky slab of Southern-fried funk with a side of sizzling guitar rock. Baird has never been shy about his preference of musical styling, drawing heavily from the well of ‘70s-era guitar rock with just enough Hank-inspired country twang thrown in to reveal the work’s Southern origin; judged in this light, Buffalo Nickel certainly doesn’t stray far from its roots.

Unlike the blues-infused rock of Joe Grushecky, or even Springsteen’s earlier material, Baird’s creative output reflects the working class nature of his predominantly Southern audience. This is rock ‘n’ roll for folks that show red necks beneath their blue collars, the same sort of listeners that once championed bands like Lynyrd Skynyrd and Molly Hatchet. Unlike those artists, however, Baird shows more British influence (i.e. the early classic rock of the Stones and the Faces) alongside the spirits of Hank Williams and Ernest Tubb. This audience wants its rock loud, electric and with no sign of the intellectual pretension or dedication to fashion shown by many trend-oriented bands.

Baird doesn’t disappoint. The cuts on Buffalo Nickel are solid rockers, from the rockabilly-touched “Little Bit” to a raucous, inspired cover of Joe South’s “Hush” (with vocal assistance from South himself) or the syncopated rhythms and buried vocals of “Hit Me Like A Train.” The funky riffs shown on “Cumberland River” are part of a long-standing Southern musical tradition, belying the song’s lyrical criticism of Nashville as “an empty promise, soulless and hard as stone.” The irony of Baird’s use of this particular musical style underlining a poetic damnation of a “Music City” that often turns its back on tradition is not lost on this Nashville-based critic. “Hell To Pay” is a good ol’ Dixie-styled tale of retribution that utilizes the imagery of fire and brimstone to smite critics and enemies, while “Trivial As the Truth” – which would make a great radio cut if every “progressive” station wasn’t too busy playing Nirvana and Pearl Jam every hour – is a great lyrical “piss off” to everyone trying to hold the spirit of rock ‘n’ roll down.


Baird’s work continues to improve with Buffalo Nickel. Age and experience, in this case, do equal a certain hard-won wisdom, and even if Baird continues to work in as untrendy a milieu as he does, there’s nobody better at cranking out tunes like these. He may never again sell a million records or receive anything close to significant airplay, but he can make a living with work as good as this, and have a hell of a lot of fun along the way. (American Recordings, released 1996)

Also on That Devil Music:
Dan Baird’s Love Songs For the Hearing Impaired CD review
The Yahoos’ Fear Not the Obvious CD review