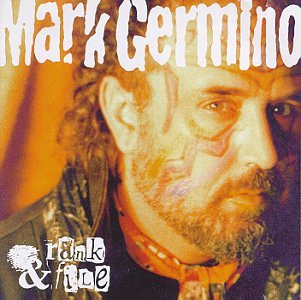 In a city like Nashville, filled with mostly mediocre songwriters churning out tunes for Music Row’s country music machine, it’s always a breath of fresh air to hear Mark Germino. One of the city’s greatest underrated and overlooked talents, Germino stands tall alongside wordsmiths like Steve Forbert, Bill Lloyd, and Steve Earle who don’t quite fit into the system, square pegs  in a round hole world who are creating some of the best music that you’ll ever hear. Case in point: Rank & File, Germino’s wonderful acoustic collection from late ‘95.


Germino is a story-teller, more in the vein of a Dylan, perhaps, than either Bruce Springsteen or Joe Grushecky, although he brings to his work more country, rather than folk, influences. Germino is working class all the way, a self-described “politically incorrect, liberal redneck.” With an artist’s soul and a wanderer’s experience, with more angry attitude and self-righteous frustration than any punk rocker could ever muster, Germino breaths life and energy all of its own into every song that he puts to music and sings.

From the self-crucifixion of the artist in “Poet’s Lament” (“Well the poet laid his pencil down/excused himself and took/A loaded pistol in his hand/and shot himself in the foot”) to the not-so-subtle social commentary of “Field’s of Man’s New Order” (“I don’t like your tabloids, I don’t like your networks/they manipulate me while keeping me informed/your misuse of headlines, your sad propaganda/I hate your self interest as sure as you’re born”), Germino has an eye for the small details that effect our lives, and the superb ability to relate them in stories that will touch us.

With “Fire In the Land of Grace,” a fanciful retelling of the singer’s visit to Graceland, Germino takes back the spirit of rock ‘n’ roll and delivers Elvis from purgatory, while “Rosemary’s New Constitution” is a call to arms for the average man, a fantastic outline of a utopian nation: “And all the blacks own the food and the whites own the fuel/and the natives own the land so they’re covered/the rich own the schools, the poor own the banks/so we’re all forced to deal with each other.” Germino’s songs often express radical ideas, related simply through song without the bombast and bullshit that often accompany public discourse.


Even for a songwriter as masterful as Germino, he sometimes outdoes even his best work. “Felix Tucker’s Biggest Lie” is one such moment, a classic story of “an honest man from the hills of East Tennessee” that evokes the spirit of an innocence long passed, a tale of  morality that showcases man’s constant philosophical struggle with what’s right and what’s wrong. The song’s chorus, the delightfully paradoxical “And he was and he is and he will be, he’s been honest since he was a kid/but the biggest lie that he ever told is the most honest thing that he ever did” perfectly frames the verses (and the moral) sung in between. Delivered in a Delta-influenced, talking blues style, “Felix Tucker’s Biggest Lie” is a perfect example of art at its best, entertaining and thought-provoking. To go into too much detail would weaken the song’s strength; you’ll just have to check it out on your own.

Rank & File’s other transcendent moment is in the story of “Rex Bob Lowenstein,” retold from Germino’s electric album Radartown. The song’s protagonist, a mythical deejay at radio station W.A.N.T. is the music lover in all of us, playing a loose format of songs: “You can call and request Lay Lady Lay/he’ll play Stanley Jordan, U2 and Little Feat/he’ll even play the band from the college down the street.” Rex Bob is a champion for music in all of its diversity, a friend on the box that will play your tunes and keep you company (a purpose that radio serves for many late-shift and all-night workers who fight fatigue with the songs sent out across the airwaves).

The station, of course, changes formats and Rex Bob, like many of the talents of his generation, is sent out to pasture (albeit not quietly). The song is less about what we’ve gained by technological advances in entertainment (equipment, formats, delivery systems) and more about what we’ve lost by placing profit before pride and personality. At once both tragic and triumphant, “Rex Bob Lowenstein” may well be the most fervent damnation of corporate domination in the entertainment world that will ever be written.


Germino collected a fine group of musicians to play on Rank & File. Veteran Mac Gayden, a talented songwriter in his own right, offers his multi-instrumental skills, while bassist Tom Comet played previously with Germino on Radartown. Drummer Pat McInerny keeps the entire affair solid, while keyboardist Michael Webb’s contributions are subtle, though necessary. They’ve together created a soundtrack that is sparse and minimalist, perfectly echoing the spirit and nature of these songs. Like those artists mentioned alongside him in this piece, Germino offers music direct from his heart, allowing the songs to speak for him, and, by extension, for us, as well... (Winter Harvest, released 1995)