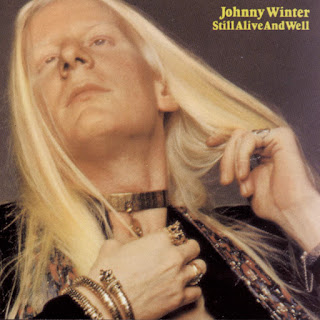 When blues-rock guitarist Johnny Winter released his fifth studio album, Still Alive and Well, in early 1973 he’d been away from the decades’ thriving and ever-changing music scene for nearly three years. During this time, Winter had been hospitalized for heroin addiction and had already run through two bands – his original blues-rock trio and the hard rock-oriented Johnny Winter And, with Rick Derringer and members of the McCoys. While the former band had experienced some chart success with Winter’s self-titled debut album and its follow-up, Second Winter, the first Johnny Winter And album in 1970 barely charted, a relative failure partially redeemed by the band’s moderately-successful 1971 live album.

Winter put together a kind of new band for Still Alive and Well, with guitarist Derringer and bassist Randy Jo Hobbs from Johnny Winter And, and drummer Richard Hughes, who would be part of Winter’s bands for three or four years. With Derringer producing, and including guest musicians like Todd Rundgren and Mark “Moogie” Klingman (later of Rundgren’s band Utopia), Still Alive and Well was a welcome comeback album from the talented guitarist, hitting #22 on the Billboard albums chart and featuring a number of songs that Winter would perform well into his lengthy career.


Still Alive and Well blows into town with a flurry of notes, Winter’s scorching intro to the well-known B.B. King hit “Rock Me Baby” leaving nothing but flames and ash behind as the singer’s roaring vocals are met by a percussive avalanche. Winter has always claimed that he wasn’t much of a singer, and while his vox here won’t be mistaken for King’s smooth-as-silk croon, there’s plenty of soul and fire riding atop the ripping guitar licks and fatback rhythms. Dan Hartman’s “Can’t You Feel It” is a similar barn-burner – dialed back a notch, perhaps, but evincing a Southern rock groove with a heart of pure blues. Songwriter and multi-instrumentalist Hartman was a member of Johnny’s brother Edgar’s band at the time, keeping it all in the family.

The first of two Rick Derringer-penned songs on Still Alive and Well, “Cheap Tequila” is a delightfully greasy ballad in a Rolling Stones vein, with imaginative lyrics and a country-blues vibe. The song benefits from Winter’s appropriately heartsick vocals, a big joyful chorus, and light-fingered mandolin pickin’ courtesy of Mr. Johnny which, intertwined with Derringer’s electric guitar, makes for some truly mesmerizing instrumentation. The first of Winter’s two original songs here, “Rock & Roll,” is a Texas-styled boogie-blues romp in the finest Z.Z. Top style, which means that it has plenty of electrifying slide-guitar work, stomp ‘n’ stammer percussion, and gruff vocals that barely rise above the livewire six-string rattle.


Mick Jagger and Keith Richards of the Stones wrote “Silver Train” specifically for Winter, and he did a heck of a lot more with the song than the Glimmer Twins ever would. Opening with a choogling locomotive rhythm, Derringer’s slide-guitar, and “Moogie” Klingman’s honky-tonk piano-pounding, Winter’s vocals provide a curious cross between Jagger and Howlin’ Wolf, at once both growling and twangy, driven to rise above the strident, busy instrumentation. It’s a raucous performance by the entire band, and not the last to infect these grooves. By contrast, “Ain’t Nothing To Me” is a sleazy barroom ballad, a sordid tale of booze and violence that offers up Derringer’s weepy pedal steel and Winter’s wry country-western styled vocals. Why one of those bright-eyed MBAs with one of Nashville’s Music Row labels hasn’t had one of their white-bread artists cover this old-school honky-tonk treasure is a mystery to me.

The Derringer-penned cover song was tailor-made for the Texas blues-rock guitarist, its tale of triumph and defiance sung with all the heat and energy of a revved-up jet engine. Winter’s playful, razor-sharp vocals are matched by Hughes’ relentless drumbeats and crashing cymbals, his high-flying guitar solos swooping and soaring like an F-15 Eagle in battle. “Too Much Seconal” sits at the opposite end of the musical spectrum, the jazz-blues dirge not lacking in fervor but delivered in a much more laid-back manner. Winter’s elegant slide-guitar and mandolin are met by Jeremy’s Steig’s fluid flutework, the woodwind’s notes dancing around the steel-stringed instrumentation and creating a fever dreamlike effect.

The original vinyl version of Still Alive and Well closed out with a cover of the Stones’ “Let It Bleed,” faithfully delivered by Winter and crew with a little less twang and a little heavier rock ‘n’ roll sound than the original. The 1994 CD reissue includes two bonus tracks – rowdy covers of Little Richard’s “Lucille,” which is pure juke-joint vamp with a funky, walking rhythm and scraped, trembling fretwork and Dylan’s “From A Buick Six,” which amps up the Scribe’s oblique lyrics with rattletrap instrumentation, a boogieing backbeat, and shards of rhythmic guitar. Both songs could have easily been included on the original LP, fitting in both stylistically and in the reckless energy of their performances.


Some 40+ years after its release, Johnny Winter’s Still Alive and Well remains the guitarist’s highest-charting, best-selling, and most critically-acclaimed work. Musically, the album runs the gamut of rock, blues, and what we’d today call alt-country, providing the listener with plenty of twangbangin’ good fun while still managing to pacify the purists with a handful of traditionally-styled blues tunes. While Winter would go on to make albums equally as great (Guitar Slinger, Third Degree, and I’m A Bluesman all come to mind), he’d never again achieve the perfect blend of roots ‘n’ blues that he did with Still Alive and Well, an essential entry in the Johnny Winter canon. (Columbia Records, released March 1973)