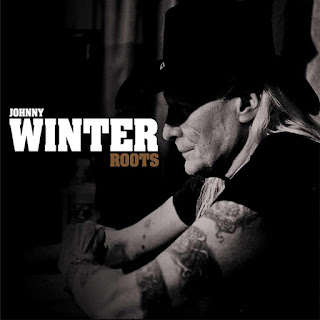 It’s been seven years since guitarist Johnny Winter’s last studio album, the acclaimed 2004 set I’m A Bluesman, and better than a decade before that since the release of 1992’s Hey, Where’s Your Brother? In the interim, there has been an abundance of live albums – some more legitimate than others – as well as seven volumes of Winter’s personally-curated Live Bootleg Series collections. Health issues, business problems, and overall lack of label interest have seemed to keep the guitarist sidelined rather than in the recording studio.

For what is essentially only his second new album in nearly two decades, Winter rounded up some friends to accompany him in the studio. It’s a mark of the guitarist’s status in the blues world that he managed to bring in such talents as Sonny Landreth, Warren Haynes, Susan Tedeschi, and Derek Trucks, among others, for the recording of Roots, a straight-talking, hard-rocking collection of blues and R&B standards. With so many gifted musicians surrounding him, you’d think that Winter could leave a lot of the heavy lifting to others, but that’s not the case here – Roots is Winter’s one of the best albums of his lengthy career, the guitarist playing and singing with the same belly full of fire that he brought to his work in the 1980s.


Roots kicks off with the smoother-than-silk “T-Bone Shuffle,” an almost-faithful re-creation of Texas blues great T-Bone Walker’s classic tune, featuring slide-wizard Sonny Landreth’s steely playing deep in the grooves. While the performance offers one of Winter’s best vocal performances in years, the intertwined guitars rattling away above the swinging rhythm section is a thing of pure beauty. Ditto for the Elmore James by way of the Allman Brothers Band cover of James’ swaggering “Done Somebody Wrong,” which includes ABB/Gov’t Mule guitar-banger Warren Haynes laying down some greasy slide alongside Winter’s stinging, high-velocity solos.

For “Got My Mojo Workin’,” a song that the guitarist originally recorded with the great Muddy Waters, Winter is joined by harp player Frank Latorre. This is a rabble-rousing rendition of the blues classic, upbeat and rowdy with a joyous Chicago blues-styled rhythmic base, Winter’s voice and fretwork joined at the hip with Latorre’s random blasts of harp. Rhythm guitarist and long-time Winter musical foil Paul Nelson adds a lot of flavor in the background, while the spot-on bass/drums combo of Scott Spray and Vito Liuzzi keep things rolling.


Winter brings in country music superstar and frequent blues LP guest guitarist Vince Gill for a raucous take on the Chuck Berry gem “Maybellene.” With a twang-and-bang that we haven’t heard since his Still Alive and Well album, Winter and Gill swap some tasty notes as pianist Mike DiMeo channels his inner Jerry Lee Lewis with a welcome bit of reckless key-bashing. The Jimmy Reed standard “Bright Lights, Big City” is a red-hot duet between Winter and guitarist Susan Tedeschi, the two giving off sparks with their incendiary solos, smoldering vocal turns, and the song’s jazzy arrangement. By contrast, Clarence “Gatemouth” Brown’s “Honky Tonky” is a throwback to the Texas coast circa 1955. The instrumental features Winter’s rattletrap guitar buzzing and dancing across the rhythms, his playing punctuated by brother Edgar’s raging saxophone, the resulting performance a welcome “cool down” after the fiery Winter/Tedeschi duet.

Winter revisits the Elmore James’ songbook with a blistering cover of the classic “Dust My Broom.” Joined by Derek Trucks on the track, the two talented instrumentalists slap more slide-guitar licks into four minutes than a fan could ever hope for, Winter’s growling, howling, playful vocals supported by ringing guitar notes. The two men have an easy chemistry, and their love of the material shines through in this stellar performance. The R&B gem “Come Back Baby” provides a classy outro to Roots, Winter’s soulful vocals accompanied by his subdued, albeit elegant fretwork and John Medeski’s chiming keyboards, a full horn section turning the performance into one worthy of the rhythm and blues revues of decades past.


These sorts of patchwork albums, featuring a lot of guest musicians, are often a way to put new product on the shelf while masking the inadequacies of the name artist. Not so with Roots, Johnny Winter’s marquee status accompanied by some of the fiercest, most accomplished playing and singing of his career. Spurred on, perhaps, by the presence of so many distinguished blues and blues-rock talents, Winter rises to the challenge with an impressive performance on a slate of classic blues and R&B classics. Showing that he can still call up some fire and brimstone with his guitar, Winter knocks it out of the park with Roots. (Megaforce Records, released September 27, 2011)